The National Jazz Museum In Harlem

By AAJ STAFF
August 30, 2010
Sign in to view read count
The National Jazz Museum in Harlem is at 104, E 126th Street, a few steps from the bridge that carries the Metro North trains to and from Connecticut from the 125th Street station. Situated on the second floor, the museum is primarily a suite of offices with a large front area that presents photographs, video documentaries and books on jazz to the public. 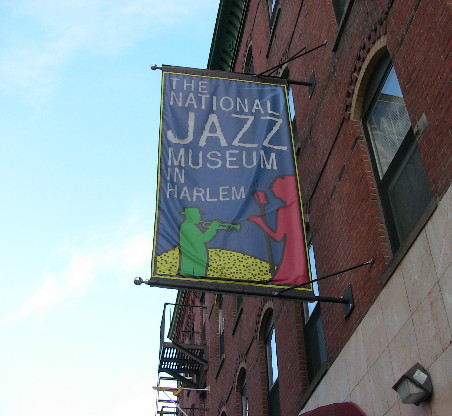 The Museum's executive director is Loren Schoenberg, saxophonist, arranger and conductor, and a former assistant of, then manager for, Benny Goodman in the '80s. Goodman played with Schoenberg's Loren Schoenberg Big Band in 1985, on a PBS television special. In the Museum's office reception area, there is a photo of Schoenberg in front of a clowning Benny Carter, who is pretending to look shocked at something. Schoenberg became Executive Director in 2001, and has overseen substantial growth in activities and presentations. The Museum hosts cultural and educational events all year round.

In 2005, bassist Christian McBride became co-director of the Museum, and performs an ambassadorial role for the Museum as well as occasional educational work.

The Museum hopes to move to a new development across from The Apollo Theater on 125th Street, possibly in 2012. Instead of the current suite of offices, this site would be 10,000 square feet in size, providing space for interactive presentations including a listening library and a theater for performances. The Museum also sponsors a number of jazz events at other venues in New York City.

An array of photos, taken by jazz chronicler Hank O'Neal, line the main wall of the public area. O'Neal had the idea to write a book on living jazz legends. He interviewed and photographed many musicians, and published a book called The Ghosts of Harlem: Sessions with Jazz Legends (Vanderbilt University Press, July 2009). Subjects include the well known and the slightly less well known. Fats Waller sideman guitarist Al Casey (who died only in 2005), Basie alumni and inventor of the electric guitar Eddie Durham, and Milt Hinton, himself a major jazz photographer as well as famous bassist, are among the portraits.

Museum volunteer and jazz expert Burt Westridge says a number of the musicians photographed by O'Neal were, in later life, members of the Harlem Blues And Jazz Band, a famous orchestra of older musicians that was founded by jazz aficionado Al Vollmer in 1973. The idea was brilliant, as the band kept jazz musicians form the big orchestras and smaller groups of the past actually performing. Many former sidemen of names such as Louis Armstrong and even Joseph "King" Oliver played in the band. (A documentary on the band was released in 2004).

Westridge is a goldmine of information, relating where musicians lived as well as other facts. He tells how Durham made his own electric guitar in 1929 when with the Jimmie Lunceford orchestra.

Westridge also reveals that here was a predecessor to the current museum, a downtown location, that was open for a brief time in the 1970s on W 55th Street. Westridge was there, and tells of the opening of the Count Basie exhibition, where Basie himself played with a trio. Charlie Mingus attended, and took over from Basie's bassist Eddie Jones.

The piano in the public area of the Museum belonged to pianist Dick Katz, who had played with Charlie Parker, and whose family donated the instrument.

Books of photographs are also on hand. In addition to the book by O'Neal, there is Images Of Jazz by Lee Tanner, that sits appropriately on a table in the reception area, an ideal coffee table book.

There are also, of course, the famous books by bassist and photographer Milt Hinton. His first book was Bass Line, and has excellent photographs from Hinton's days on the road including the early days in the 1940s. One masterpiece is a photograph of the young Dizzy Gillespie asleep on a train, circa 1940. The young guy in the photo, wearing a pullover, could be from almost any era. The ability to communicate a timeless quality must surely be a major objective of photographers.

Shortly afterwards in the book, there is another photo of Gillespie in 1981, blowing up his cheeks for a group of French children in Nice, on the Cote d'Azur.

As Westridge says, the book is primarily a kind of biography, told partially through the photographs. Hinton's second book, Over Time, focuses on a wide range of musicians. A great example is a photograph of drummer (and composer of the Ellington band track "Skin Deep") Louie Bellson in Tehran, Iran in 1973. Bellson is leaning forward on a chair, while two broad shafts of light advance through the doors up the back of the auditorium.

There is also a film showing the musicians in O'Neal's photos in action. A live clip of Clark Terry came on the screen. "Mumbles," said Westridge, referring to Terry's method of mumble-singing, which was demonstrated by its creator on the screen. With Durham's appearance, Westridge revealed that Durham had regularly played a club called The West End near Columbia University, on the Upper West Side—with the Harlem Blues And Jazz Band.

Cab Calloway, performing a Durham arrangement on screen, brought the comment form Westridge that, in his opinion, Calloway was performing dances in the 1930s that people think Michael Jackson invented.

Many of the musicians in the photos played with Calloway, at some time in their careers, at the famous Harlem venues such as Savoy Ballroom (of "Stomping At The Savoy" fame). Calloway's band provided a hothouse for the development for more than one generation of musicians, as Dizzy Gillespie's early career illustrates. Another such band was Lucky Millinder's and musicians from that band are also represented. The heyday of Harlem is therefore well pictured.

Arrangers such as Sy Oliver are also represented in the video. A film pointing up Oliver's work features the Tommy Dorsey orchestra and the big hit "Opus 1," its brilliantly commercial sound having the impact, but not the kitsch, of Glenn Miller's music. In the clip, trumpeter Shorty Baker hits high notes in the style of the later Cat Anderson—both trumpeters were Ellington band members. Benny Carter, a major arranger as well as saxophonist, also appears.

Footage of saxophonist Eddie Barefield followed, featuring trumpeter Doc Cheatham (as Westridge mentions, of American-Indian heritage) and pianist Sammy Price. Price, says Westridge, survived all his boogie-woogie rivals and so eventually felt able to call himself "King of Boogie-Woogie piano." He would say, "I'm the king, because all the other guys are gone!"

Then there was a video of Illinois Jacquet with Milt Buckner at the organ and "Papa" Jo Jones on drums.

Westridge once saw Mary Lou Williams at Carnegie Hall in a double-bill with none other than the avant-garde Cecil Taylor. The two pianists played separately and together. "I don't know who matched them up," he says. "They were opposites." Yet, in the Museum's clip of Williams, she plays a slow blues where there is, at one point, a distinctly Thelonious Monk-like touch, and the wide-open space in her playing could conceivably allow room for a percussive pianist like Cecil Taylor without too many clashes!

A quote from Duke Ellington is in the commentary that accompanies the photos on the wall. Ellington says, "Mary Lou Williams is perpetually contemporary. Her playing and performing have always been a little ahead throughout her career... She is like soul on soul."

The bassist Bill Lee, another photo subject, was the father of director Spike Lee. But more interesting revelations were to follow. Westridge said that Eddie Durham told him he, Durham, had actually written the famous Basie number "One O'Clock Jump," and that the tune had, moreover, originally been entitled "Blue Balls."

Continuing the parade of important members of the jazz fabric in the film is singer Joe Williams, performing the hit "Alright, OK, You Win" with the Count Basie Orchestra.

An interesting singer in the film is Thelma Carpenter. Her clear performance of the Jerome Kern classic "I Must Have That Man" is a new experience. In true Harlem fashion, she had begun her career by winning the (still-running) amateur night at The Apollo in the late 1930s.

Another discovery for some may be bassist Major Holley, from Detroit, who, like Slam Stewart, vocalised in unison with his bass. Westridge says Holley was nicknamed "Mule," because he "looked like one." In another example of jazz connections, he says that another Detroit native in the photos is Oliver Johnson, whose grandson has played with Wynton Marsalis.

A prominent photograph is that of Frank Wess. Wess is, of course, still playing powerfully.

Amongst the museum's many events was a series of nights celebrating of Quincy Jones' achievements. Jones couldn't be there in person, so he was beamed in via video conference call.

On the northern (street-side) wall of the room is a group of photographs of the famous Harlem jazz venues, such as Mintons, the Savoy, and of course the Apollo.

A large collection of books are also of particular interest. Early blues is covered too: Alan Lomax's The Land Where The Blues Began is there, as is a book entitled Early Down-home Blues. Scott DeVeaux's excellent history of bebop is there, as is Gillespie's autobiography, To Be Or Not To Bop, and My Sax Life by Paquito D'Rivera.

Both the serious, Music From Primary Sources—A Guide To The Holdenhauer Archives, and the humorous, Book Of Jazz Anecdotes by Bill Crow are also on the shelves.

The National Jazz Museum in Harlem highlights a time when music was truly living in the moment, when the vibrato in a trumpet or a voice could genuinely change peoples' views on life, when there was a creative world that was truly organic.