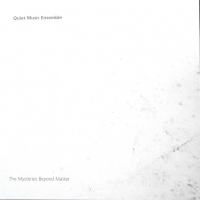 The latest release from the redoubtable Farpoint Recordings is the debut recording from Cork-based experimental music group Quiet Music Ensemble (QME)—what a great group name, eh? The group consists of double bassist Dan Bodwell, cellist Ilse De Ziah, clarinetist Seán Mac Erlaine, trombonist Roddy O'Keeffe with ensemble founder and musical director John Godfrey on electric guitar. QME was launched in 2008 at the Quiet Music Festival where they premiered works they had commissioned by Alvin Lucier, David Toop ("Night leaves breathing," his first commissioned piece) and Mark Applebaum, who all attended the event. Since then QME has appeared at many prestigious festivals in Ireland and beyond, including the 2013 Huddersfield Contemporary Music Festival where they premiered a new commission by composer Jennifer Walshe (see YouTube below.)

It is indicative of the esteem in which QME is held that such respected composers will write pieces for them. On this album, three of the four pieces were written especially for them and these are their world premier recordings. The pieces in question are "Night leaves breathing," "Shadow Lines" by Lucier and "The Mystery Beyond Matter" by Pauline Oliveras—all impressive heavyweights. The fourth piece is "Hand Tinted" written for QME by their own John Godfrey. All this talk of commissioned works should not lead to expectations that QME play chamber music. As the group's instrumental line-up suggests, its players are drawn from various musical roots. Crucially, the group includes free and guided improvisation in its practice, as well as interactions with pre-recorded and live electronics.

"Night leaves breathing" opens the album in a calm, tranquil manner. Toop's piece is played quietly and, as its title hints, emulates the gentle rustles and crackles of forest leaves with nothing untoward disturbing the peaceful atmosphere it creates. Its quietness draws listeners in, encouraging them to listen hard and engage with its every sound. It is not a piece that can "just be there," but that commands attention---surely the intention of Quiet Music Ensemble. Although the track is intended to be listened to at low volume, when the volume is cranked up, it reveals an impressive mass of detail that is undreamt of when heard more quietly, that detail being vital to its soundscape which creates a unique ambience.

ADVERTISEMENT
Lucier's piece "Shadow Lines" is not as quiet as Toop's, being more sustained and drone-like, but not in any simplistic way, as repeated listening reveals levels of detail undreamt of initially. In QME's hands it achieves many of the same aims as the opener, particularly its capacity to encourage the all-important "quiet listening." Although its soundscape is more diffuse and subtly different, the Oliveras piece (which, significantly, lends its title to the entire album) is just as richly rewarding, again giving greater returns the more attention is invested in it. Unsurprisingly, there are affinities between "deep listening" and "quiet listening." Closing the album in equally fine style, Godfrey's "Hand Tinted" maintains the uniformly tranquil mood that has persisted throughout the album. Thankfully, this debut is the first of a pair, with its successor due to follow within months. On this showing, that is excellent news. On disc, QME has well and truly arrived. Beautiful!