By EYAL HAREUVENI
May 10, 2014
Sign in to view read count
Guitarist Dom Minasi is an innovative, searching musician that needs no introduction. His two new intimate duo albums feature him in two completely different situations: one playful and emphatic,one experimental and challenging. He excels on both, demonstrating again and again his consummate command of his instrument and the improvised form of his art. 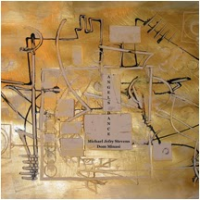 Minasi and pianist Michael Jefry Stevens met for the first time in 1995 while recording the Stevens-Dominic Duval quintet Elements (Leo, 1996). These two experienced and highly creative musicians kept meeting but Angel Dance is their first ever duo album.

The joy and fun of the two is reflected throughout the sixteen short and concise pieces. Stevens compared the recording session to "two children inventing the most interesting games to play together." The two immediately form a deep and thick, always highly supportive interplay. Like a meeting of old friends who have not spoken in many years, the spontaneous, improvised musical talk tend to be restless and associative, each phrase leads to another one and another one in completely different direction, but still keeping the interest and the tension of the original topic.

Minasi and experimental guitarist Hans Tammen, known for connecting his so-called endangered guitar to software and electronic devices, met in violinist Jason Hwang's Spontaneous River ensemble, Symphony of Souls {Mulatta, 2011), where the two played acoustic guitars. The short duo moment of Minasi and Tammen was for both a rare magic moment, and the two decided to explore the duo format more and kept jamming until the recording of Alluvium.

Unlike Angel's Dance, this musical meeting is much more adventurous. It contrasts the warm, flowing sound of Minasi's guitar with the inventive, experimental playing of Tammen. Tammen uses the guitar body and its strings as an acoustic sound generator (hammering it, squeezing and rubbing its strings, and always searching for new sounds), while Minasi weaves these jangled, chaotic and percussive sounds into serpentine lines, attempting to structure these fleeting sonic flashes in clear and cohesive narratives.

The different temperaments of these inventive guitarists charges the sixteen—again short and concise—improvisations with disquieting tension. Their dense and uncompromising interplay rarely rests on a reserved or playful form of interplay except on the short segments of the bluesy "Whispers from the Heart" or the surprising comic, last piece, "Rapid Erosion." Minasi and Tammen never attach themselves to a theme, melodic vein or any form of linear progression but are busy exploring the common ground of such brilliant, intense collision between their distinct and highly personal styles.