By JOHN SHARPE
January 1, 2011
Sign in to view read count 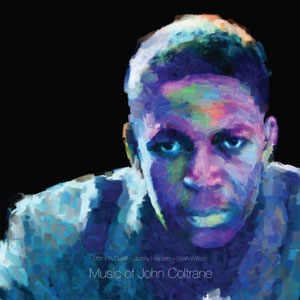 Why would modern improvisers want to create a session around music over 50 years old? That's the question the pairing of bassist Dominic Duval and saxophonist Jimmy Halperin look to answer over the 68-minute program of The Music of John Coltrane. Having already delved into the Thelonious Monk songbook on Monkinus (CIMP, 2006) and Monk Dreams (No Business, 2009), the duo this time has drummer Brian Willson along for the ride, and an honest, engaging and enjoyable ride it is too.

Duval numbers some heavyweight assignations on his dance card, with ten years spent in the company of piano iconoclast Cecil Taylor, and an ongoing stake in Trio X, with multi instrumentalist Joe McPhee. With drummer/composer/educator Willson, he has also fuelled the flights of saxophonist Ivo Perelman on Mind Games (Leo, 2009). Halperin is a less combustible commodity than the Brazilian, but study with the legendary pianist Lennie Tristano and tenor saxophonist Warne Marsh bespeaks a sophisticated harmonic conception.

Halperin plays with a sweet airy tone, only rarely pushing to the extremes of his horn. At times, the reedman's singing lines recall Sonny Rollins rather than Trane, but the composer's influence exerts its pull on "Living Space" and "Syeeda's Song Flute," particularly on the rubato upper register passages. As is his norm, although Duval provides a rhythmic substructure it is augmented by a stream of contrapuntal melody, against which the others push or follow as the moment dictates. In fact both the bassist and Willson—who delivers his polyrhythms with a light touch—allow sufficient freedom that the saxophonist is free to choose whatever direction he wishes.

One of the highlights comes in "Naima," where Duval and Halperin partake in inspired dialogue, the saxophonist's rapid fire runs nimbly echoed by the bassist. Halperin's cadenza of restrained but emotive multiphonic cries towards the end of "Moments Notice" also stick in the mind. Overall, the date has a relaxed feel, as if these pieces have been so well absorbed that they don't need charts. And that's perhaps the answer to the opening question: they play these tunes because they enjoy them, and their associations as starting points for their own invention.