The Music Of Alice Coltrane Turiyasangitananda at Fringearts 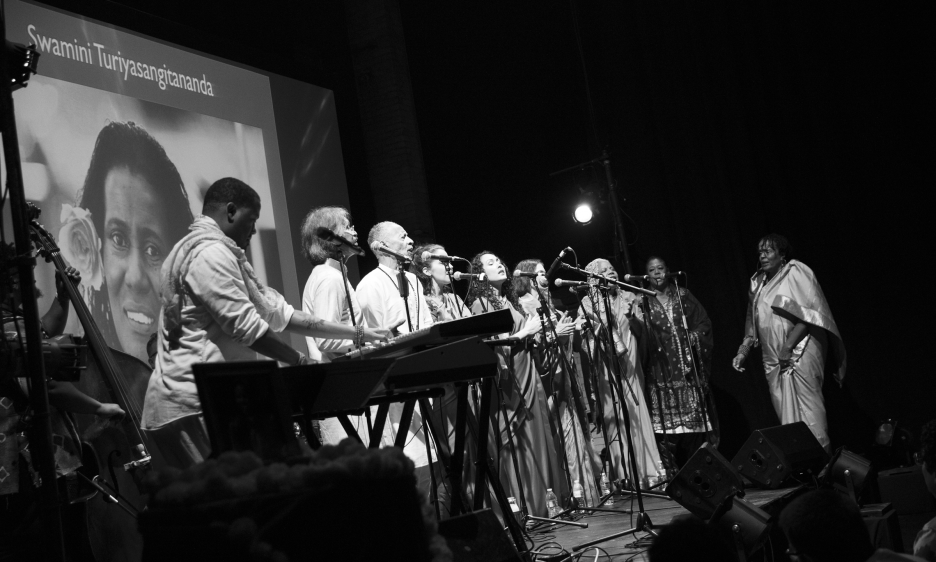 Alice Coltrane Turiyasangitananda (1937 -2007) was the second wife of John Coltrane. Raising a family with him, she was also a fine pianist and replaced McCoy Tyner in Trane's quartet for a short time. Following his death, she experienced an emotional crisis which led her to seek aid from integral yoga guru Sri Swami Satchidananda Saraswati, and became a devotee. She eventually achieved what many recognize as true transcendence and became founder and spiritual director of the Sai Anantam Ashram. There, she would perform formal and informal devotional Vedic ceremonies. She performed solo chants, known as bhajans, and group chants, or kirtans. She developed original melodies from the traditional chants, and started to experiment by including synthesizers and sophisticated song structures. She made cassettes of these performances, and in 2017, some of these were compiled into World Spirituality Classics 1: The Ecstatic Music of Alice Coltrane Turiyasangitananda under the Luaka Bop label. This concert was partly a celebration of that album.

On this evening, the Sai Anantam Ashram Singers were accompanied by the great Rudresh Mahanthappa on alto saxophone, Surya Botofasina at the keyboard, Dezron Douglas on bass, and Swiss Chris on drums. Mahanthappa's parents came to the U.S. from India, and he has incorporated Indian Carnatic music into his jazz repertoire. Here, he simply stepped up to the plate when his turns came and played beautiful improvisations that seemed to lift the music to another level of mastery.

The concert was carried through from beginning to end as a spiritual experience, including a period of silent meditation. A gentleman from the ashram described his transformative experience with Turiyasangitananda (Alice Coltrane) and the spiritual aspect of devotional chant and song in yogic practice. The singers engaged in a series of chants that gradually built in intensity and musical significance. As keyboard and drums began to participate, the real musical significance of the performance began to emerge. The phrases from the East began to merge with aspects of the music of the West, especially gospel, elements of rhythm and blues, European classical music, and all sorts of jazz inflections. It was remarkable to hear how these diverse influences could fuse into a whole that had no national or ethnic boundaries. Music is truly the universal language of mankind.

Thus, thanks to Alice Coltrane's vast experience, the music, while rooted in yogic chants, incorporated diverse streams of musical expression. Jazz and R&B emerged in large part through the singing in the African American churches in the South, and Trane in particular was early exposed to it and echoed it in the preacher-like feeling in his playing. Satchidananda was the guru at the legendary Woodstock concert. One of his goals was to unite all religions as one. Mahanthappa is a saxophone master indebted to both Charlie Parker and the Indian Carnatic saxophonist Kadri Gopalnath. It was heartwarming and elevating to experience how the passage of time and the transcendence of time were both realized in a musical evening where the chants of Hindu devotees blended with other devotional and musical sources. And how the love between Alice and John Coltrane blossomed into Turiyasangitananda's self-realization and what we may some day see as a new form of musical expression without borders.

This concert was part of the "October Revolution" series of contemporary music sponsored by Mark Christman's Ars Nova Workshop, which deserves much praise for presenting music and performers on the cutting edge who in this day and age face funding cuts and other obstacles to artistic expression and freedom.