By DAN BILAWSKY
February 2, 2013
Sign in to view read count 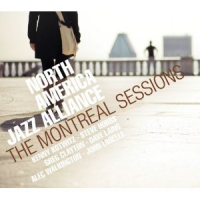 A producer's wish to recapture the sound of an accordion legend's band set the ball in motion for this recording. Producer Peter Maxymych wanted to "recreate a sound that was heard in clubs and other venues in the 1960s and '70s." Maxymych goes on to note that "accordion was the lead instrument in those groups and the music was inspired by Art Van Damme, who led a quintet with vibes, guitar, bass and drums." Van Damme, who worked for NBC for fifteen years and recorded with guitar icons like Joe Pass and Johnny Smith, was a masterful accordionist. He hasn't always received the credit he deserves because of the oft laidback nature of his records and the kitsch cocktail party album titles that accompanied some of them, but he was the real deal.

In looking to recapture the virtues of Van Damme's music, Maxymych looked far and wide to fill roster spots. Satellite radio hipped him onto the work of American vibraphonist Steve Hobbs, who actually played with Van Damme. Canadian guitarist Greg Clayton, who has a definite Pass-influence in his playing, came aboard next. Maxymych felt that Clayton's frequent gigging companion—vocalist John Labelle—would be a good choice as a guest on a few numbers, so half of the band was set at that point. Next, he turned to two major rhythm fixtures in Canada—bassist Alec Walkington and drummer Dave Laing—to flesh out the bottom end of the band. All that remained was to find an artist to fill Van Damme's big shoes, and Maxymich found his front man via Youtube. California-based accordionist Kenny Kotwitz, who happened to be a close friend of Van Damme, completed the circle as the final member of the North America Jazz Alliance, but that was really just the start of things.

Hobbs got down to the business of writing the arrangements and all parties involved met up in Montreal to record the album. While Hobbs and Kotwitz didn't know each other, or any of their new Canadian band mates, they quickly settled into a comfort zone, discovering and delivering music with a cool-hot dichotomy. "Just One Of Those Things" opens the album on an up-tempo tide, with several strong solos, but things simmer down for a bossa nova-based "Close Your Eyes," which is one of three numbers to feature Labelle's understated crooning. The band taps into its inner Count Basie on "Cute," which features the requisite drum breaks from Laing, and glowing sounds bring a mesmerizing quality to "Angel Eyes." The lighthearted sounds of Brazil return with "Only Trust Yout Heart" and the album rides to its conclusion with the swinging, appropriately placed "That's All."

While this may just be a one-off album for all of these musicians, it doesn't come off that way. The North American Jazz Alliance makes classy, polished jazz delivered in clear and crisp fashion.

Just One Of Those Things; Close Your Eyes; Cute; Oblivion; Angel Eyes; Nobody Else But Me; Delilah; Charade; Dancing In The Dark; It Could Happen To You; Only Trust Your Heart; That's All.