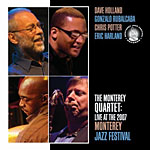 A bonus of festival work is the opportunity to recruit musicians for new collaborations. It doesn't always work, but sometimes it does, and when Monterey Jazz Festival Records' General Manager Jason Olaine worked with Vision Arts manager Louise Holland to bring together bass icon Dave Holland, saxophonist Chris Potter, drummer Eric Harland and pianist Gonzalo Rubalcaba, it seemed like a match made in heaven.

It was. The Monterey Quartet: Live at the 2007 Monterey Jazz Festival, culled from its two performances, is filled with compositional invention, high level interaction and energy so joyously alive it seems to burst out of the speakers. Dubbed The Monterey Quartet to reflect the group's egalitarian nature, Holland remains its live spokesperson (heard at the group's 2009 Montreal Jazz Festival performance), but the bassist has always been a democratic leader—one reason why Potter has remained his tenor saxophonist of choice for over a decade. Holland's unshakable playing anchors The Monterey Four, and the preponderance of irregular meters and complex navigations make this album fit more easily within his lengthy discography than, perhaps, that of Potter's or Rubalcaba's, but it is a collective, with no single voice dominant and every one distinctive.

Rubalcaba's Afro-Cuban background is a subtle undercurrent, but in contrast to his own records he's more firmly planted in the modern mainstream. Despite being rhythmically knotty, the pianist's "50" grooves effervescently, his solo combining fluid, motif-driven runs with dynamic chordal passages that become an exciting and clearly spontaneous call-and-response with Harland. "Otra Mirada" may be gentler, but despite its balladic nature it can't help but simmer with an underlying intensity, with another piano solo of effortless and near perfect construction that manages, along with Harland and Holland's equally flowing support, to smooth out its more complex form.

Potter has emerged as one of today's most muscular tenorists. While work with his Underground group, most recently on Ultrahang (ArtistShare, 2009), bristles with electric energy, here in this all-acoustic context his playing is equally electrifying. Winding his way, at high speed, through his two charts—the episodic "Minotaur" and higher octane "Ask Me Why," which also features a stunning closing solo from Harland—Potter's ability to be both powerfully visceral and thematically focused has made him the most obvious legacy carrier of Michael Brecker, though he's less uptown than the late saxophonist.

The always impressive Harland—whose complex, Zakir Hussain-informed polyrhythms drive his opening solo on "Minotaur," has emerged as an equally vital composer. "Treachery" is a powerful modal workout for Rubalcaba and Potter, while "Maiden," with its dark-hued and lyrical opening solo from Holland, is The Monterey Quartet at its most elegant.

Holland is as graceful as ever, the most overtly lyrical composer of the bunch on "Step To It," while playing to his more unfettered side on the intro to his ultimately balladic "Veil of Tears." Brilliantly conceived and just as sharply executed, The Monterey Quartet: Live at the 2007 Monterey Jazz Festival injects the modern mainstream with some high-powered and forward-thinking action.

Treachery; Minotaur; Otra Mirada; Step To It; Maiden; 50; Veil Of Tears; Spoken Introduction; Ask Me Why.