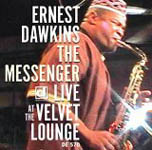 If these players are indeed looking towards new horizons, as the band's name suggests, then they're doing so from a vantage point rooted in the past, and their view of the past is of a worthwhile order. If a great many musicians regard it as something worthy only of the most submissive reverence, these guys view it as a happy, rambunctious place, where the joy of the moment is to be gripped with both hands, and the thrill of making music together can scarcely be equalled by any other life experience.

Similarly, the role of Chicago as a key to the history of the music is always in their view. In much the same way as the sound of the Stax label might have evoked some spirit of Memphis, so this music is steeped in Chicago.

If this can be defined musically as a simultaneously tight but loose feel, then these guys have got it down on the likes of "Meen Ameen," where they call to mind the Art Ensemble Of Chicago in the theme statement before Dawkins' alto sax evokes nothing but his own musical personality.

Their references to the past are not limited by geography. On "The Messenger" they capture the insistent nature of Benny Golson's "Blues March" as it was committed to posterity by an edition of Art Blakey's band. The leader's alto is forthright again, and trombonist Steve Berry swaggers like there's no tomorrow.

"Toucouleur" is something of a contrast, and perhaps the piece best exemplifies the amount of ground this band can cover whilst retaining its musical identity. Trumpeter Maurice Brown has maybe his best outing here, simultaneously reflective and ebullient, if only to show that it can be done—and how much fun the doing can be.

It might be fun that gets closest to the whole point of this music, and that it was recorded live in the old Velvet Lounge in Chicago places it right at the musical heart of its place of origin. The crowd that night must have had a ball.