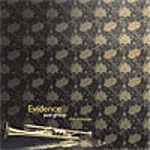 Here is a well deserving jazz combo that could use some publicity beyond their Grand Rapids, Michigan base. Headed by multi-reed player Michael S. Doyle, this sextet offers a group of durable bebop compositions, all originals, which could stand up with the best of them.

It would be pointless to indicate the specific quality of the music since Doyle and trumpeter/flugelhornist Chris Lawrence spin some tuneful melody lines and solos without taking a great deal of your time. The average length of these dozen tracks is three to four minutes with the exception of the Coltrane-esque "This" and "Hal," a tribute to pianist Hal Galper. What that means is the solos are cool, economical and lyrical. Further taking part in Evidence are keyboardist Steve Talaga, bassist Tom Lockwood, drummer Fred Knapp and percussionist Rob Mulligan.

Doyle was a New Yorker who got his musical education there. He moved to Michigan from New York in 1997 with lots of enthusiasm after his work in the Big Apple with jazz players including Donald Byrd, David Liebman, Branford Marsalis and Barry Harris. Although the group has two previous albums and has appeared in live concerts on Michigan television, the strongly presented The Message is likely not being heard beyond a very limited area.

The Message; Sun Samba; This; Lady Rainbow; Bragdocious; Two Lane Landscape; Rogers Park; Hal; The Undefeated; What Can I Do Now; Biting the Apple; Sharing.