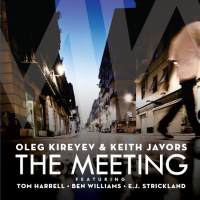 Performing together since 2007, Russian saxophonist Oleg Kireyev and Philadelphia-based pianist Keith Javors formed a solid quartet they eventually led to the studio for their debut album Rhyme & Reason (Inarhyme Records, 2010). The Meeting is their follow up recording with a program of four originals and three re-imagined tunes from The Great American Songbook delivered in a tasteful post-bop style.

Interestingly enough, it was Kireyev who discovered Javors while surfing the internet and cemented their friendship while touring together in Poland and Russia. The music documented here, actually reflects their feelings about working together as the notes to the album state, "Our personal and musical rapport involves mutual sensitivity and spontaneity" the result of course is, a musical partnership that has, and continues to produce a slice of contemporary jazz full of rich, swinging rhythms that flows beyond borders.

Their debut album featured a quartet with the great Boris Kozlov on bass and E.J. Strickland on the drums who, returns for this second effort. The personnel changes for this date include, replacing Kozlov with Grammy Award-winning bassist Ben Williams and augmenting the band by the addition of trumpet luminary Tom Harrell making this one of the finest quintets around.

The music opens up with a Kireyev original titled "April," featuring sprite solo moments from the saxophonist and the trumpeter, while Strickland pounds the drums and plays the crash cymbals followed by the eventual superb finger-play on the keys by the co-leader on an excellent opening statement. The Bruno Martino soft samba "Estate" is the first standard of the set performed in a standard trio format with Javors leading the way accompanied by superb back up by the drummer and bassist.

The title track is a Javors composition that swings mightily featuring dicey spots by Williams and Harrell and includes one of Kireyev's finest solos on the sax. Performing one of Jazz's fundamental pieces, the co-leaders play off each other quite well on the immortal "Body and Soul" making this version, one of the best tracks on this disc. The original "Fresh Blues," is another one of those swinging pieces that has the entire band gyrating on a pulsating tune that features Harrell on flugelhorn and the saxophone leader on yet another splendid phrase.

The two remaining tracks are alternate takes of "April" and "Fresh Blues" yet, are still engaging and entertaining. Convening a cast of luminaries, delivering fresh new originals and providing creative treatments of oft-recorded standards, The Meeting seems to be another successful gathering of music, magic and swing by co-leaders Oleg Kireyev and Keith Javors that clearly here, yields excellent results!