By EDWARD BLANCO
February 29, 2008
Sign in to view read count 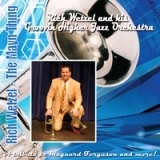 Rich Wetzel is a Holton-Leblanc trumpet artist, clinician, chairman of the Tacoma Jazz Festival and representative of Conn-Selmer, leading manufacturer and distributor of band and orchestral instruments. He is also the leader of the fourteen-piece Tacoma-based Groovin Higher Jazz Orchestra, which offers their third album and first studio recording, The Mayn Thing, in a tribute to the late great trumpeter, Maynard Ferguson, whose music and influence have provided an inspiration to Wetzel.

As was often the case, Ferguson had many great writers and arrangers over the years and on this recording, eight of the twelve numbers on the album are classic tunes from the Ferguson library. Wetzel and the band pay homage to the late master with a barn burning performance that begins with the Ferguson chart, "Break The Ice" and include other noteworthy additions that make for a swinging tribute.

The repertoire is varied and ranges from the funky Jay Chattaway arrangement of Herbie Hancock's "Chameleon," to the Chattaway big band composition "Superbone Meets The Badman," featuring a sizzling Keith Klawitter solo on baritone.

Rebecca Gonzales provides tender vocals on two familiar standards "My Romance" and the Anthony Newley staple, "What Kind of Fool Am I" with howling support for both pieces from the ensemble's very able woodwinds that sound more like the brass section of a twenty-piece orchestra.

The other featured vocalist, Steve Stefanowicz, turns in a magnificent performance on Hoagy Carmichael's classic "Georgia On My Mind," a rendition that Ray Charles would be proud of. He also belts out the lyrics of "How Sweet It Is," accompanied by a fine tenor solo from John Beach.

Wetzel of course is featured throughout but none so pronounced as on Don Menza's electric "Groove Blues," where the horns launch a furious assault led by the leader's own high-reaching trumpet. Also weighing in here are Beach, Dan Wager on alto, Tracy D. Hooker on trumpet and Jenny Kellogg on trombone.

On the oft-played standard "Tenderly," Wetzel takes his trumpet to heights that only a legend like Ferguson would visit and other trumpet masters like Arturo Sandoval can appreciate, with endorsements like "You and the band wail on this CD, congratulations."

If you liked Maynard Ferguson and his music, then you will cherish this humble swinging tribute from Rich Wetzel and his Groovin Higher Jazz Orchestra. The music is pure big band offering exciting arrangements, superb vocals and a Blue Ribbon performance from Wetzel and crew. One listen to The Mayn Thing confirms that the main thing this album provides is excellent big band music.

Break The Ice; Chameleon; Coconut Champagne; A Country Boy; Grorgia On My Mind; Groove Blues; How Sweet It Is; My Romance; Rocky (Gonna Fly Now); Superbone Meets The Badman; Tenderly; What Kind of Fool Am I.