By KURT GOTTSCHALK
December 14, 2007
Sign in to view read count 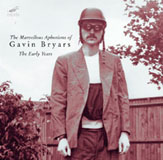 While Gavin Bryars is best known for his long-form compositions ("The Sinking of the Titanic, Jesus' Blood Never Failed Me Yet), he also played a significant role in the early development of British free improv, playing bass in the trio Joseph Holbrooke with Derek Bailey and Tony Oxley. He left the trio, which was far from any level of fame, to focus on composing and on this CD the New York label Mode presents four of those early pieces in updated interpretations.

"The Squirrel and the Ricketty-Racketty Bridge was written for Bailey, who included it on his 1971 Solo Guitar Volume 1 and also played on a 1978 quartet version with Bryars, Brian Eno and Fred Frith (released on Eno's Obscure label). The piece calls for at least one guitarist and two guitars and here is performed by New York-born Seth Josel, who now lives in Berlin. The primary difference between his and previous versions is in the electronics; where earlier versions were rough and textural, played on hollow- body instruments, Josel's electric version is comparatively pristine. While the clean sustain of his guitars brings out the counterpoint of the composition—an ascending and descending 12-note run with hammered, harmonic interruptions—the same quality robs the piece of its meat. The players' struggles with the instruments and the listeners' struggles to follow the piece's logic are lost—which depending on taste might make it more enjoyable or just dumb it down.

"1, 2, 1-2-3-4 was also released in a previous version on Obscure. The piece calls for a group of musicians playing the same set of music, but following different arrangements on headphones, rather than playing "together. The 1975 version was a sort of slow, plaintive jazz piece, with the differing intervals creating accidental dissonances that may have sounded stranger thirty years ago than they do in the age of sampling and digital music. The growing ambiguity in the work is similar to the hazy approximations of melody Bryars was exploring around the same time with the Portsmouth Sinfonia, a chamber orchestra comprised of people who didn't know how to play their respective instruments.

For the new version, Josel and saxophonist/session leader Ulrich Krieger, along with piano, bass, drums and a second guitar, use a half-hour Beatles medley as the recorded source. The familiarity of the riffs and the tendency to try to sing along mentally make this an entirely different piece of music. On record it's a good bit of jumbled fun, but at the ensemble's Nov. 8, 2007 performance of the same material at New York's Roulette, it proved to be tough going; watching them perform made it harder to suspend the belief that they should be playing "together, which may be truer to Bryars' intentions.

Likewise, watching the performance of "Made in Hong Kong —a piece scored for mechanical toys—robbed it of the mystery it carries on record. The scattered percussion of hopping toys, paired with electronic beeps and voices, is more successful in the abstract, removed from the visual cues of its sources. The fourth piece of the CD and concert was the most effective: "Pre-Mediaeval Metrics is a pulse piece based on rhythms in Latin poetry, rendered here by multi-tracked saxophones and guitars. With all the lovely blur and clutter of the other pieces, the fifteen minutes of "Metrics come off as positively austere.