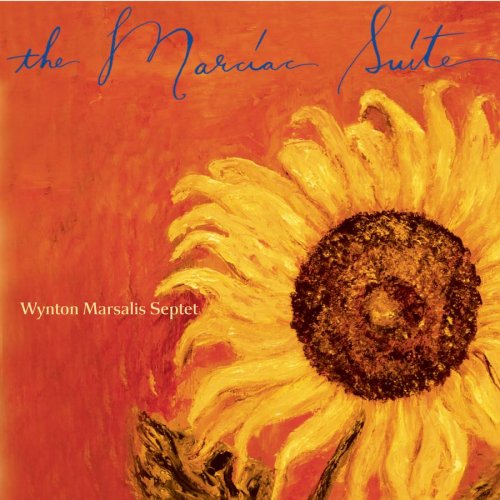 Finally...The End. Like a lemming, I dutifully purchased each volume of Wynton Marsalis’ “Swinging Into The 21st Century”, collecting the little stickers and sticking them on the collection card, and finally, mailing that card in. In ten short weeks (two weeks longer than promised), the final installment of Marsalis’ jazz lovefest arrived on my doorstep.

The “Swinging Into The 21st Century” has been quite impressive and has, for the most part, been positively reviewed in both the jazz and classical press. I reviewed all or the previous volumes, finding Mr. Jelly Lord The best CD released in 1999. The Marciac Suite is close in spirit to a cross between A Fiddler’s Tail Suite (Sony Classical/Columbia 60979) and Big Train (Sony Classical/Columbia 69860). The Marciac Suite is the synopsis of a 90 minute extended piece that premiered in Marciac, France as a part of an educational program at the Marciac College that Marsalis had been involved with since the early ‘90s. The piece is comprised of 13 parts and is performed with his typical neoconservative flare, a fact that makes this disc attractive to me.

Piano Clinic. Marsalis employs almost all of his most recent pianists. Marcus Roberts, Eric Lewis, Marthaniel Roberts, Cyrus Chestnut, Farid Barron, hell, everyone but the extra- fine Eric Reed. The playing and composition are uniformly Marsalis, with his trumpet playing on fire from the get go. The Marciac Suite is the most enjoyable of the suites and ballets. And should be the third of the set bought by the selective. Right behind Marsalis Plays Monk (Sony Classical/Columbia 67503) and Mr. Jelly Lord.

Loose Duck; The Big Top; Jean-Louis Is Everywhere; Mademoiselle D'Gascony; Armagnac Dreams; Marciac Fun; For My Kids at the Collège of Marciac; Marciac Moon; D'Artagnan; Guy Lafitte; B is for Boussaget (and Bass); In the House of Laberriere; 13. Sunflowers.