The New Standard Quintet: The Many Faces

By HRAYR ATTARIAN
October 18, 2012
Sign in to view read count 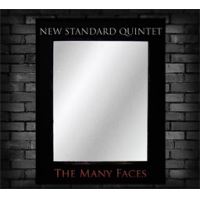 There are certain features that are common among all types of jazz, not the least of which is creative spontaneity. The New Standard Quintet's The Many Faces demonstrates this unifying theme on the nine original that comprise the album.

Saxophonist Ken Partyka and guitarist Pat Fleming, who also composed the tunes, co-lead the quintet. The group consists of versatile veterans of the Chicago music scene whose immense individual talents are only enhanced by their group camaraderie, both of which make this genre-bending journey a delight.

The title track is a contemporary ballad, with Patryka's poetic saxophone weaving a complex melody over rock-solid support from the rhythm section. Patryka's tenor solo on the breezy bossa "A Voz Doce" channels an inner Stan Getz; the song also features Fleming's flamenco-flavored acoustic guitar and Tom Vaitsas' deceptively light electric keyboard, both of which disguise the complex improvisation within.

Vaitsas electrifies the atmosphere with his fusion styling on the soulful "Melbourne Method" and "Uncertainty Principle," while his dark blue sound on the modal "One Eyed Jacks" adds another dimension to Fleming's intensely funky guitar and Patryka's nocturnal tenor. Their alternating complex extemporizations on minor keys create a late-night, intimate atmosphere with all its romance, promises and disappointments.

In addition to providing intricate and impeccable support, bassist Curt Bley and drummer Rick Vitek get their turns in the spotlight; the funky, gritty Bley on "Mirror, Mirror," and the the propulsive Vitek on the whimsical "In the Kitchen," a bop-ish piece featuring a call-and-response pattern between each soloist and the rest of the band.

Although not a groundbreaker, this record of varied musical flavors and high quality musicianship is both intellectually stimulating and emotionally satisfying. Each spin of the disc should lead to a fresh layer of enjoyment.

The Melbourne Method; Mirror, Mirror; A Voz Doce; Uncertainty Principle; The Many Faces; Only More So...; One Eyed Jacks; In The Kitchen; No More Words (Goodnight).

Title: The Many Faces | Year Released: 2012 | Record Label: Self Produced

About The New Standard Jazz Quintet