Steve Coleman and Five Elements: The Mancy of Sound

By IAN PATTERSON
January 6, 2012
Sign in to view read count 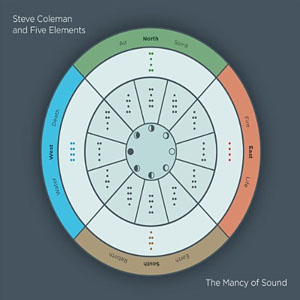 Although alto saxophonist Steve Coleman's conceptual approach to composition has grown increasingly adventurous, high-brow or esoteric, depending on your viewpoint—with lunar phases and the Yoruba of West Africa's philosophical system providing inspiration here—The Mancy of Sound merely represents Coleman's relationship to the world, which is the font of most music of worth. Retaining the same musicians from Harvesting Semblances and Affinities (Pi Recordings, 2010), Coleman's Five Elements follow-up shares its broad stylistic features, including non-western rhythms and multiple, interweaving voices, though it differs in the increased rhythmic energy and slightly sweeter aesthetic.

The four-part "Odú Ifá Suite" is the centerpiece of the CD---representing the elements Fire, Earth, Air and Water—and revolves around Shyu's voice. There's an elemental African flavor to the playing, particularly on the up-tempo "Fire-Ogbe," with Shyu's voice floating gaily over brass and reed solos. An intermittent motif serves as a signpost for the musicians, as trombone, trumpet and saxophone all pass the baton. Tight, near-unison riffing or counterpoint lends close support to the soloist. The high energy slowly dissipates, like dying flames. The gently cantering "Earth-Idi" features male African vocals, with trumpet, trombone and saxophone uniting in a delectable descending motif. Again, the energy dissolves, leaving just Shyu's mantra-like vocals, African vocal and percussion. There's a vaguely Duke Ellingtonian spirit about this beautiful composition.

Sweltering brass and reed and lively percussion bring an Afro-Cuban vibe on "Air-Iwori." A ritualistic element colors Shyu's vocal, which seduces over the babble of singing, chanting instrumental voices, rendering palpable the music's deep roots and spiritual vein. "Water-Oyeku" shares the rhythmic pulse of "Earth-Idi," and Shyu and an African male vocal trade back and forth over tightly woven trombone and trumpet. The music swells, enveloping, before gradually receding.

The suite is bookended by the harmonically arresting, percussion-free "Formation 1" and "Formation 2,"— allowing Shyu's captivating voice to emerge more fully. "Noctiluca (Jan 11)" features freer soloing, less buoyed by counterpoint, though when Shyu sings, a carpet of sound lifts her. A two-minute percussive exchange nicely alters the record's overriding aesthetic, before all the voices converge again in a stimulating combination of careful charts and free improvisation. Shyu's interpretation of Patricia Magalhães' poetry, sung in the song's tail, contains the same seeds of mystery as her wordless singing, as calm descends once again.

An important influence on Coleman, alto legend Charlie Parker once told journalist Nat Hentoff, upon listening again to Bartók's Second Piano Concerto, which he had previously dismissed: "I heard things in it I never heard before." Sage advice for anyone who hopes the wonders of The Mancy of Sound will reveal themselves.