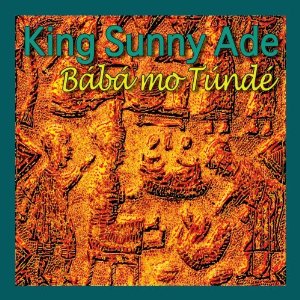 A leading exponent of Nigerian juju music since the late 1970s, and in 2010 still the most sought after live artist for expatriate Nigerians in Europe and north America, vocalist and guitarist King Sunny Ade once rivalled Afrobeat's Fela Kuti and Zairean rumba's Franco with the frequency of his album releases. Between 1975 and 1984, Ade and his band, the African Beats, released over 40 albums domestically, and by the early 1980s the average sale of each was estimated to be in excess of 200,000 copies (an achievement only slightly minimized by the fact that a substantial proportion of these sales were of bootlegged pressings).

At the start of the 1970s, Ade had been part of juju's ruling triumvirate, along with Chief Commander Ebenezer Obey and Admiral Dele Abiodun. Ade's "synchro system" then sat between Obey's roots focused "miliki system" and Abiodun's pop and funk friendly "adawa system," deftly balancing tradition with futurism to the advantage of both (the African Beats' inclusion of a pedal steel guitarist was one of several strokes of genius). He surged ahead of his rivals internationally in the early 1980s, releasing three albums on Island Records including the masterpiece Synchro System (1983). Dropped by Island, who had hoped for a global juju breakthrough on a par with that of reggae in the previous decade, Ade continued to release albums at a rate on his Sunny Alade label.

Since the late 1990s, Ade's recorded output has slowed considerably, and the double-disc Baba Mo Tunde is his first studio recording in ten years. The good news is that it's a magnificent affair—firmly planted in classic juju but giving a nod to modernity through the inclusion of guest keyboardists Wayne Horvitz and Joe Doria. It's as good as anything Ade and the African Beats have ever released; which is to say, it's sublime. Traditional African culture respects age and experience, and listening to Baba Mo Tunde you know why. At 64, Ade—fronting an African Beats lineup which includes both mature and youthful players—generates more swing and power than ever before.

Rich in drum and percussion grooves, relishing extended collective improvisation, and, particularly in live performance, preferring to explore a tune for anything between 30 minutes and an hour, a case could be made for juju as the first "jam band" style (and, indeed, ex-Phish guitarist Trey Anastasio has cited the African Beats as an influence). Juju bands' head arrangements are precisely codified, but the guitars and talking drums take turns to solo on them freely and at length, punctuated by call and response vocal sections founded on traditional Yoruba proverbs and folklore. The result is mesmerizing: a multi-layered, shape shifting jam which is both melodically easy on the ear and rhythmically raunchy, food for the head as well as the feet and hips. Most of the tracks on Baba Mo Tunde last over 15 minutes, with "Baba Feran Mi" clocking in at 18:55 and "Baba Mo Tunde" at 31:02, close enough to give an idea of the live experience.

In addition to Ade himself, the African Beats' lineup featured on Baba Mo Tunde includes six drummers and percussionists—playing talking, sakara, omele and kit drums and a variety of traditional percussion including gongs and shekere—along with six back-up vocalists, rhythm and bass guitarists, and several keyboard players. The inclusion of Joe Doria is inspired, his empathetic Hammond B3 fitting into and enhancing the grooves to wonderful effect. Amongst the other guests, Philadelphia house and hip hop DJ King Britt contributes a winning 15:17 remix of the title track.

Ade's return to the recording studio is a landmark event. Let's hope he repeats it again soon.