The Magpie Salute At The Grand Point North Festival 2018 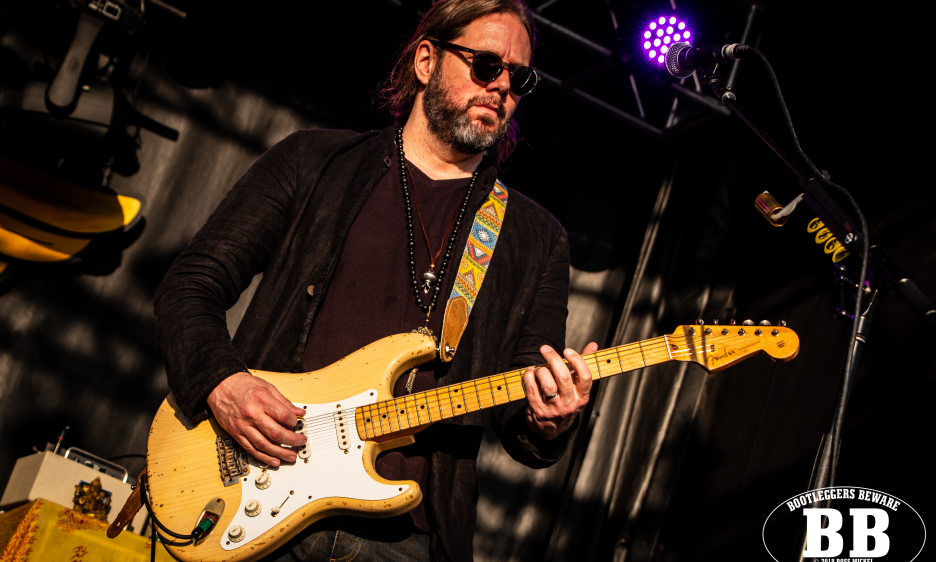 The Grand Point North festival sound system didn't quite do justice to the multi-textured sound the The Magpie Salute proffered late in the afternoon of Sunday September 16th, but that didn't undermine the verve, purpose and confidence the sextet displayed during the course of their comparatively abbreviated set on the shores of Lake Champlain. This six-man ensemble, comprised of three former The Black Crowes (not Counting Crowes as one uninformed wag remarked) plus three staunch comrades, also deserved a bigger crowd than they got in the transition from the ramshackle local act preceding them.

Nevertheless, the demonstrative knot of fans right at the front of the stage was joined by more than a few of the curious as this slightly less than an hour set progressed through an astute mix of new original material from the recently-released High Water I (Eagle Rock, 2018), wisely-chosen songs from the discography of the aforementioned Southern rockers and an incendiary cover of Led Zeppelin. It's may very well be unprecedented in the annals of rock and roll for a band with as much formidable history as the this one to write, play, sing, perform and record in such a way it does justice to both its past and its present, while at the same time creating great potential for its future.

It's to their earnest credit that The Magpie Salute acquitted itself in such high style. The reality their audience that had dwindled markedly after the previous act had finished at the other stage may well have accounted for the seemingly diffident attitude Robinson displayed within his somewhat curt song intros. But this co-founder of the Crowes (with his now-estranged sibling Chris of the The Chris Robinson Brotherhood) otherwise radiated a distinct air of authority over the next hour-plus, as did the various members of the band in their own distinct contributing roles.

Robinson's multiple instrumental interactions with long-time guitar partner Marc Ford, as evolved on "My Morning Song," were maneuvers of great intricacy that belied their economy. And the former's fulsome harmony singing during "Walk On Water," like that of bassist Sven Pipien's voice (also an alumnus of the 'old band' as Rich called it), added a mellifluous element to the cacophony. As did the piano and organ of Matt Slocum, that is when you could hear it: the keyboards were often lost in the treble-heavy mix, as were nimble drummer Joe Magistro's kick drum, not to mention most of the propulsive fluidity of his rhythm section partner's playing; it wasn't wholly necessary to know any of these songs by heart to understand how the accents of the rhythm section, like Slocum's understated playing, add immeasurably to the distinction of the Magpie Salute sound.

The same is true of the versatile presence of lead vocalist John Hogg, Kudos to him and the group at large for its valiant but largely vain attempt to replicate the layered sound of their studio work on the stage with acoustic guitar on "Mary the Gypsy" (and some harmonica near the finale ). The British expatriate otherwise fulfilled his frontman role with as much good-humor as dignity, never showboating or engaging in excessive physical gesticulations or vocal histrionics that might otherwise have distracted from the musicianship around him (GPN festival namesake Grace Potter could learn something here). On the contrary, he appeared to dance with joy around the stage when he wasn't concentrating his somewhat husky voice on clear elocution of lyrics to tunes such as "Send Me An Omen:" the cacophony allowed snippets of lyrics to come through just often enough to prompt a serious listener to investigate the imagery.

In a knowing recognition of their lineage, this sextet was keenly aware how the Black Crowes' staple "Wiser Time" echoed "Send Me An Omen" from the Magpie Salute debut album. Juxtaposition in the song sequence clarified the similarity, while placement of the readily-recognizable former tune, following so closely as it did on the heels of a blistering interpretation Zep's "Custard Pie," alone caught the attention of an increasing influx of progressively delighted onlookers; Hogg's laughing intro plus post-song commentary was more direct acknowledgment of his group's influences than was offered by many of the derivative artists on the Grand Point North festival bill this weekend.

But the fact of the matter is that the Magpie Salute did full justice to the randy din of Jimmy Page and company that first appeared on Physical Graffiti (SwanSong,1975). It is tribute to hometown heroism of a sort that the gimmickry of Burlington artist Caroline Rose's set, immediately preceding the Magpie Salute, received louder and longer ovations than Robinson, Ford, Pipien, et. al. But no matter: the Magpie Salute will surely return to the Green Mountains, perhaps at another al fresco location at Shelburne Museum next summer for a Higher Ground presentation in Ben & Jerry's Concerts on the Green, at which they will no doubt receive those accolades the purity of their rock and roll music deserves.

About The Magpie Salute