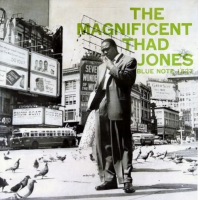 Man does not live by hard bop alone, even on Blue Note. Sometimes, you just got to have a ballad. When you're in the mood, this is the record for you.

Thad Jones provides the horn, and he has never been better. Jones is best known as co-leader of the big band that bore his name, but this 1956 recording is his break-out moment as both a small-group leader and trumpeter. And while you may think of Jones as a hard bopper, five of this CD's seven tracks are either ballads or slow blues numbers.

Add the fact that this is the recording debut of pianist Barry Harris—whose long career led to a Grammy Lifetime Achievement Award—and you've got the makings of something special.

First, the bop. Two tunes show off the hard bop chops of Jones, Harris and tenor-man Billy Mitchell (backed by the impeccable rhythm section of Percy Heath on bass and Max Roach on drums). "If I Love Again" and the 10-minute Jones original "Thedia" give each member a chance to play hard and fast. Harris and Mitchell particularly shine.

But it's the slow stuff that stands out here, in a variety of ways.

The CD begins with the classic "April in Paris"—a slower, more subdued take than the famous version recorded by Count Basie just a year earlier. It continues with a slow blues original by Jones called "Billie-Doo," a play on the French word for "love letter," though it's far more smoky and noir-ish than any love letter I've ever received.

The highlight—at least to these ears—are the final two cuts, which weren't even on the original LP. The Gershwin classic "I've Got a Crush on You" is a fine piano-trumpet duet, with the bass and drums sliding in almost unnoticed nearly two minutes into the piece. Now this is what a love letter should sound like.

Finally, the CD closes with a quiet little duet of Jones and guitarist Kenny Burrell, with no rhythm section at all, on "Something to Remember You By." It's been done before, sometimes as a schmaltzy ballad, sometimes as a fiery blues, but this dreamy little lullaby is the perfect way to end this almost-perfect CD.