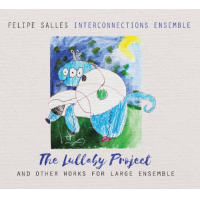 The five profound and picturesque lullabies on Brazilian-born, Massachusetts-based composer-arranger Felipe Salles' new CD, The Lullaby Project, are followed by three tango-inspired themes whose texture mirrors the bright and rhythmic musical landscape of his native country and southern neighbor Argentina. Salles' concepts are brought vividly to life by the nineteen-piece Interconnections Ensemble which has no trouble navigating his often intricate scores, whose essence ranges from Baroque to modern classical motifs, and from jazz to Brazilian folk music.

Those who equate lullabies with Johannes Brahms will no doubt be surprised to hear that Salles' approach to the genre is somewhat more diverse and quite a bit more assertive. Yes, there are moments of calmness and repose (as on #3 in particular) but the over-arching mood is one of liveliness and power (#5, for example, swings persistently using, among other things, what seem to be unbilled bandoneons). In other words, these are not your standard-issue lullabies. And even though each of his arrangements is through-written, Salles leaves ample room for improvisation with an admirable solo (or two) on every lullaby; he even enlivens the party himself with a crisp soprano solo on the seductive finale, "Carla's Tango." Tenor Jacob Shulman and trumpeter Doug Olsen are front and center on "Lullaby #1," bass trombonist Angel Subero and guitarist Kevin Grudecki on "#2," Olsen, tenor Mike Caudill and vibraphonist Ryan Fedak on "#3," baritone saxophonist Tyler Burchfield and trumpeter Eric Smith on "#4," alto Jonathan Ball and pianist Nando Michelin on #5.

The tangos, on the other hand, are more even-tempered than one might expect, with Caudill and trombonist Dan Hendrix sharing solo space on the aptly named "Odd Tango," while soprano Richard Garcia embraces the spotlight on the leisurely yet picturesque "Astor Square" (written for Argentinian tango master Astor Piazzolla). "Carla's Tango" is another arrangement which upends the supposition that every tango must be light-hearted and hurried, as it is neither. Michelin also solos here along with Salles. Salles wrote The Lullaby Project with a game plan in mind: to create a musical commentary on the dark underlying qualities of lullabies, and choosing "to express those qualities through instrumental music. . ." As the melodies are slowly revealed, he adds, "the musical context creates a sense of evolutionary inevitability where it is possible for traditional and contemporary musical elements to meet and co-exist."

No argument here. It is, after all, Salles' plan. Does he succeed? That is for the listener to decide. What can be noted is that The Lullaby Project is well-conceived, well-written and well-performed. Its acceptance rests for the most part on one's fondness for Latin music in general and lullabies in particular, no matter what the framework.