By DAN BILAWSKY
November 21, 2010
Sign in to view read count 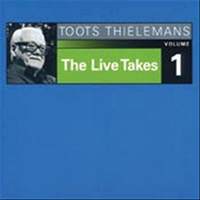 While studio recordings can capture a musician's sound, live performances capture the essence of their being and the soul within the sound. When an iconic artist like harmonica giant Toots Thielemans isn't in the studio or creating a prearranged live recording, he's still traveling the globe and bringing his music into the clubs and concert halls of the world. While most of that music never shows up on record, a little bit occasionally seeps into the marketplace. The music on The Live Takes, Vol. 1—like the songs on Sonny Rollins' Road Shows Vol. 1 (Doxy Records, 2008)—wasn't recorded with the intent of commercial release. In fact, the majority of this music was taken from recordings that Thielemans' sound engineer, Vincent Tempels, made for reference and monitoring reasons. The pressure-free atmosphere that surrounds these songs is indicative of the fact that nobody planned on putting these tracks out, but the music—heavy on ballads and brimming with Thielemans' emotionally-lined lines—deserves to be heard.

Thielemans often uses the opening moments of a song to explore the tender musical territory laid out by one of his pianists—either Kenny Werner, Nathalie Loriers, or Michel Herr, depending on the track—and this album even presents a piano-harmonica duo performance, in an unhurried exploration of "Stardust." Synthesized strings are another key part of Thielemans' musical paintings. Werner's richly orchestrated string sounds on "Comecar de Novo" create a warm, enveloping aural cocoon. He proves to be almost equally as sensitive behind Thielemans on a lovely lullaby-like take on "All The Way." Herr, on the other hand, provides one of the most startling moments on the album with his keyboard soloing on Jaco Pastorius' "Three Views Of A Secret." The rest of the rhythm section takes cues from his more aggressive statements, taking the music up a few notches in the energy department. While the keyboards don't always work—sounding a bit dated on "I Do It For Your Love" and a bit too smooth in other places—they add more than they take away.

The album opener, which begins with a freely delivered rendition of "I Loves You Porgy," before launching into "Summertime," is the real prize winner. Thielemans and Loriers have their way with the former, but the latter is where everybody lets loose. The waltzing swing drums are underscored by an "All Blues"-like bass line and the piece shifts between this groove and a straightforward swing feel in four. At the other end of the album, "That Misty Red Beast" mixes smooth sensibilities with a zealous, Joe Zawinul-like second half. While the ballads might mark Thielemans as an artist that has found a comfortable niche, this track marks him as a man who is still eager to explore where this music can take him.

I Loves You Porgy/Summertime; Comecar De Novo; Hard To Say Goodbye; Stardust; Body And Soul; I Do It For Your Love; Three Views Of A Secret; All The Way; That Misty Red Beast.