One for All: The Lineup 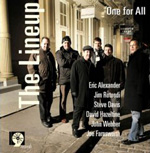 Time was when jazz history was measured in terms of linear progress as artists influenced each other to create new sounds. Jazz, it has been said, fed off of itself in a constant state of progression, pushing the music to its limits. But times have changed, and this construct has been revised several times over as legions of musicians found their inspiration in established jazz styles and stuck with them.

The Lineup is the eleventh release by One for All, a group of esteemed and virtuosic instrumentalists. The eight tracks on this release personify the hard bop ethos, but that feeling of being stuck in time is relieved by the freshness of the compositions and the outstanding musicianship throughout. No matter what the genre, nothing can replace the exuberance exhibited by musicians who clearly love what they're doing.

Tenor saxophonist Eric Alexander turns in two fine compositions: "Anatolia," which features his robust tone and restless manner of his playing, and the immensely appealing "Little Lucas," which recalls Wayne Shorter's early compositions for the Jazz Messengers and features trumpeter Jim Rotondi in a Harmon-muted solo. His playing, while rooted in the hard bop tradition, is nonetheless distinctive, and his performance is playful and understated.

ADVERTISEMENT
Trombonist Steve Davis contributes a lovely ballad, "Letter to Mary" and "Smooth," a track which oozes with late-sixties R&B-influenced cool. Pianist David Hazeltine's "The Lineup" is a true swinging period piece that follows the hard bop blueprint with fine performances from the entire sextet. But one longs to hear his keyboard contributions a bit more up front throughout the album, which are quite good, if you listen for them. The least appealing track is their version of the old standard "Sweet and Lovely." While finely executed, it lacks the excitement of the band's originals and brings a corresponding sag in texture.

For many jazz fans, this type of music is the be-all and end-all—the very essence of what constitutes jazz. Lucky for them that this release stands above a seemingly endless stream of releases that attempt to mine the past with less successful results. Straight-ahead zealots deserve nothing less than the very best of what they enjoy, and they'll find that in spades on The Lineup, and indeed on most of One for All's releases.