Willie Buck: The Life I Love 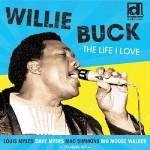 It's always a joy to hear the Chicago blues when it isn't cut with anything, and this is as pure as it comes. Willie Buck has been leading bands in the city for over forty years and this material was committed for posterity some twenty eight years ago. Passing time hasn't diminished it however and it sounds as uplifting now as it would have done back then.

Buck knows how to read a lyric and as a singer he's his own man, but that wouldn't count for much if he hadn't surrounded himself with a band that knows its stuff inside out. On the slow and vaguely brooding "How Can I Be Nice to You" the harmonica is outstanding even while it doesn't upstage Buck. The guitars of John Primer and Louis Myers snap and slink and the resulting mood just oozes sincerity.

Covering Willie Dixon's "I Live The Life I Love" isn't just Buck reaching back into the Mother lode, it's an example of how timeless this music is, at least when it stays true to itself. Buck makes the point again with Muddy Waters' "Champagne & Reefer" where the tempo is downright filthy in the most positive sense and the blues once again serves the purpose of getting rid of human frustrations in face of life's arbitrary injustices. It's thus, in short, good for what ails you.

The groove is of a different order on "Sweet Sixteen" proving that it is possible to be innocently lascivious, especially when a band is as intent on nailing it as this one is. Big Moose Walker rolls on piano to the extent that he wouldn't have sounded out of place in the Chess records studio three decades before this material was cut, while drummer Jerry Porter shows he's as well acquainted with the backbeat as Fred Below and Earl Palmer.

The last five tracks were recorded live. What they lack in audio sophistication is more than compensated for by their immediacy and fire. Recorded in Chicago back in 1984 they are in summary further testament to no holds barred blues. It's not clear whether or not it's Little Mac Simmons on harmonica on these sides but whoever it is knows his Little Walter; it's clear in every scintillating blast. It's also true that as a singer Buck is so far inside the part of the blues shouter that it can only be described as amazing. The same term goes for the potency on offer all over this release.

She's All Right; How Can I Be Nice to You; I Live the Life I Love; I've Got a Right to Love My Baby; Champagne and Reefer; There's a Time; Everything's Gonna Be Alright; Sweet Sixteen; Found My Baby Gone; Nineteen Years Old; I Want You to Love Me; Got My Mojo Workin'; Sugar Sweet; Don't Go No Further; Checkin' Up On My Baby; Just To Be With You; Blues Had a Baby.