By BRUCE LINDSAY
February 21, 2013
Sign in to view read count 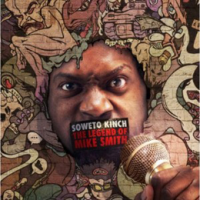 Once upon a time the C-word was in common usage. It isn't heard so much these days, but the older generation mustn't be lulled into a false sense of security, because the younger generation remains perfectly capable of using the word on occasions. This is one of those occasions, because Soweto Kinch's The Legend Of Mike Smith is very definitely a Concept Album—and it's quite a concept.

Kinch is an alto saxophonist, rapper and composer: a two-time winner of the MOBO Award for Best Jazz Act who has always seemed equally at home in hip-hop. He's no stranger to the idea of the concept album—A Life In The Day Of B19: Tales Of The Towerblock (Dune Records, 2006) fits neatly into the category—but The Legend Of Mike Smith, his fourth album, is his most complex and expansive recording yet.

This is a double album, a 140-minute narrative that combines rap, spoken word, electronics and raw, high-energy jazz. It tells the tale of Mike Smith, a struggling yet cheerfully optimistic young hip-hop artist, played with great charm by Toyin Omari-Kinch (Kinch's brother), and his attempt to break into the music big time. Smith may be talented and keen, but his path to fame is far from smooth. He experiences encounters—real or imaginary—with the Seven Deadly Sins and, in a series of spoken word tracks, he's frustrated by a range of characters including an annoying, money-obsessed, record label executive and a jobsworth council concierge. Eventually, Smith reaches his goal and, with an almost Arthurian flourish, he's given stewardship of hip-hop's own Excalibur, The Golden Mic.

Kinch's raps are inventive and articulate. They range from the angry invective of "Gula" and "The Board Game" to the languid beauty of "Better Off Alone." with Eska Mtungwazi's gorgeous vocal. The targets of Kinch's ire are the usual suspects—bankers, big business, major labels—but his lyrical attacks are fresh and imaginative. The tunes, featuring guest musicians including trumpeter Jay Phelps, saxophonist Shabaka Hutchings and pianist Julian Joseph, as well as Kinch's excellent core rhythm section of bassist Karl Rasheed-Abel and drummer Graham Godfrey, are constantly engaging. "Vacuum," featuring Phelps and Joseph, is a fine slice of downbeat, atmospheric, old school jazz. "The Bounce," which closes the album, is superb: an up-tempo slice of post-bop energy from Kinch, Rasheed-Abel and Godfrey, with a fiery guest spot from Hutchings on tenor.

There's a coherent narrative to The Legend Of Mike Smith that ensures its success as a modern day morality tale. How often it will be heard in its entirety is another matter; once Smith's story is clear few of the spoken word tracks reward repeated listening. The music, however, is genuinely multilayered—filled with creativity and drive its pleasures emerge gradually, revealing themselves a little at a time and rewarding further exploration.