Chantale Gagné: The Left Side Of The Moon

By HRAYR ATTARIAN
March 9, 2015
Sign in to view read count 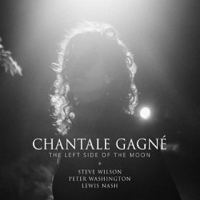 Montreal native pianist Chantal Gagné's third release as a leader, Left Side of the Moon brims with a fantastical mysticism. A translucent aura surrounds the ten Gagné compositions, and one cover, that comprise the album while an intense, organic passion permeates their core.

Nash and bassist Peter Washington have been collaborating with Gagné since the beginning of her career. As they appear on all of Gagné's prior recordings the trio has developed a sublime camaraderie with one another. This is showcased best on the haunting "Mystère" with its percolating rhythms and intricately woven harmonies. Both Asian and Western motifs pepper the jazzy spontaneity of the ensemble interplay. Washington deftly distills the essence of the piece with his supremely lyrical turn in the spotlight.

Eastern elements also turn up on the contemplative and intimate "Echoes." Gagné's cool and languid pianism creates a stimulating contrast with Wilson's simmering extemporization. This type of complementary musicianship leads to many a provocative and thrilling moments on this consistently engaging album. One such example occurs on the traditional children's song "A La Claire Fontaine." Gagné states the melody with an unadorned beauty that evolves in an eloquent nocturne with the entry of the band. The thrilling complexity of her performance exquisitely balances the elementary simplicity of the original. Wilson takes center stage with a mellifluous deconstruction of the tune delightfully returning it to its natural quietude.

The unaccompanied, cleverly effervescent "Roach Rag" closes this compelling and refreshingly inventive record. With it Gagné reveals herself as an accomplished composer, a superlative pianist and an adroit bandleader. Most importantly she is an artist with her own, unique voice that is deeply rooted in a robust musical convention but is simultaneously ingeniously singular.

Mystere; After You; The Left Side Of The Moon; Moon Gazing; In Time; Your Blues Is My Blues; A La Claire Fontaine; Just A Dream; Up Again; Echoes; Roach Rag.

Title: The Left Side of the Moon | Year Released: 2015 | Record Label: Self Produced