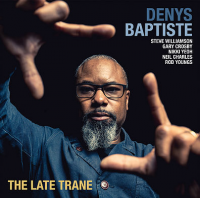 When a church is named after a jazz musician you know there's something more than music involved here. The spirituality with which John Coltrane immersed himself as exemplified by A Love Supreme, was just one of the drivers that helped make the saxophonist one of the greatest innovators of jazz. His later works were even more iconoclastic, embracing abstract themes and a conscious move towards free jazz, but still utilising time as propelled by the rhythmic powerhouse that was Elvin Jones and subsequently by the free jazz exponent Rashied Ali.

So in pursuance of his previous album, 2010's Identity By Subtraction, Denys Baptiste has created a substantial paean to the late giant of saxophone. Eight of the ten numbers here are by Coltrane, the remaining two, "Neptune" and "Astral Trane" are Baptise originals, the former a planet missing from Coltrane's Interstellar Space, the latter continuing the space theme. Notably, the 'Trane numbers are mostly from his later works and aside from "After The Rain" are not frequently covered.

Two of the guest musicians on this record, Steve Williamson and Gary Crosby are former members of the London based Jazz Warriors and Baptiste himself was a member of Crosby's Nu Troop. Another pivotal member of this ensemble is Nikki Yeoh who has been a stalwart of the British jazz scene for over twenty years. Additionally, bassist Neil Charles and drummer Rod Youngs both make noteworthy contributions.

"Dusk Dawn" from Kulu Sé Mama opens the album with a majestic tenor fanfare and transitions through coruscating keyboard and even a brief foray into a reggae beat. "Ascent" is given an electric wah-wah treatment nearer to Miles than Trane. Ballads are represented by "Peace On Earth," from Concert In Japan and the elegant "Transition," underpinned by subtle obligato bass, evincing the epitome of modal tranquillity.

The antithesis of its predecessor the Baptiste-penned "Neptune" is a maelstrom of questing agitation with both saxophonists sparring viscerally throughout. "Vigil" is groove-laden and embellished by echoey, ghostly keyboard culminating in a dynamic twin sax coda.

In The Late Trane Baptiste succeeds in conjuring-up the spirit of Coltrane without reverting to clichéd simulacrum. This is a new and fresh sounding homage to the master, serving as a reminder as to just what a huge debt is owed to him.