By DUNCAN HEINING
August 1, 2018
Sign in to view read count 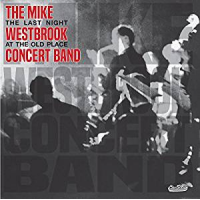 By any standards the release of The Last Night At The Old Place will prove to be one of archive releases of the year, second only, perhaps, to the 'Lost' Coltrane album. All power, therefore, to Mike Gavin who has inherited the Cadillac catalogue from the late John Jack with his first release of archive material. The Last Night at the Old Place gives those of us far too young to have been present—or in my case just too young and too far away—a sense of what the venue might have meant to London's jazz musicians. The recording, made by George Smith (contributor of the visceral tuba solo on "Conflict" from Mike Westbrook's Marching Song) on a Revox tape machine, is remarkable. It's certainly a valuable document.

As to the music, it certainly conveys something of the band's live performances at the time. Having seen the Concert Band live a year later at the Royal Festival Hall (and not appreciated what I was hearing back then), this raucous, Mingus-like performance certainly accords with my, admittedly, hazy recollections. The material is essentially that which would appear on Release. Solos by John Surman, Mike Osborne, Malcolm Griffiths, Dave Holdsworth, Paul Rutherford and others are extended slightly here. Some tracks from Release are not included and the running order is different from the Deram recording. There's no "Girl From Ipanema," "Rosie" or "Take Me Back," the latter appearing twice on Release. Here, "Folk Song" and "The Few" both appear once and are not reprised.

Westbrook has said his intention was that music should be presented as entertainment, as theatre. The pacing is a key to that effect, as is the choice of material—at times ironic or humorous, but always with an affectionate nod in the direction of the jazz tradition. I would have to say that the Deram record serves that purpose better and I particularly miss the Jobim song. But then this is 'work in progress.'

It is right to acknowledge the significance of the Old Place in the development of the nouvelle vague of British jazz. The Last Night at The Old Place allows us to do just that, though we should, of course, not forget The Little Theatre Club or the many other opportunities that musicians found to play together formally or informally, such as the Peanuts Club. It is okay to look back. This was a very important period for British jazz.

I have written extensively on the period and its and, lest there be any doubt on my position, I repeat -these years represent a great leap forward for British (and European) jazz. But I am beginning to feel uncomfortable with some of this. It is as if we would refuse to allow (some of) these musicians and composers to grow up, to develop their art. I think there is a danger that we end up fetishizing the era and its musical products, as if we would preserve them in amber.

I sometimes think that jazz fans and critics, at least in the Anglophone world, seem to operate on the assumption that artists are at their most creative in the first flush of young adulthood, with their powers diminishing with age. Either that, or a period in an artist's work is chosen as that when his or her art reached its apogee. Earlier work is seen to lead progressively and incrementally to their golden years, while that which follows represents a decline in the artist's powers.

Of course, some jazz musicians had the good sense to die young, before they had the chance to disappoint us with their later, inferior music. God bless you Charlie Parker. God bless you John Coltrane. God bless you Clifford Brown. Others, even the greats, have not been as sensible. Too few jazz fans know the later music of George Russell. In conversation, they may refer to records such as Stratusphunk and Ezz-thetics but rarely to The Essence of... or The African Game. Bill Evans would be another case in point. That trio with Scott LaFaro and Paul Motian deserves all the attention it gets from fans and critics, but what about the last trio with Marc Johnson and Joe La Barbera?

Or consider Duke Ellington. The Blanton-Webster years of the late thirties-early forties produced some of Duke's most wonderful music. But, in his later years, he composed and recorded The Far East Suite, The Latin American Suite, The New Orleans Suite and the astonishing Afro-Eurasian Eclipse. Cook and Morton describe the latter as, "World music of a very high order." How many Ellington fans even have these records in their collections?

Miles Davis managed to keep moving forward, though this was as much through gaining new, younger fans as he went rather than by retaining favour with older listeners. And the notion that privileges youth over maturity would deny artists who produce some of their finest music in later life—Stan Getz, Steve Lacy, Cecil Taylor, Anthony Braxton and Paul Bley illustrate this perfectly.

Some musicians are allowed to escape such limiting perceptions and, in some cases, deservedly so. John Surman, Dave Holland and John McLaughlin offer three 'British' examples. Keith Jarrett, Chick Corea and Herbie Hancock, from the States, also bypass such restrictions, though in Hancock's case, I would be hard-pressed to think of an album he has made since the seventies worthy of attention. But these are musicians, who fill the big concert halls, not those who would be grateful for a week at Ronnie's or the Village Vanguard. I recall talking with one of the UK's major festival promoters about a particular British musician and asking why they were playing small, out-of-the-way venues at the festival rather than the main stages. The reply was simple—the artist's audience had apparently dropped away in the last decade and a half without obvious reason. Yet, go back fifteen or twenty years and that artist was still considered in vogue by the capital's jazz audience.

I often wonder how someone like Coltrane or Bird would be seen if they had lived to a ripe old age. Would 'Trane have gone into jazz-rock like Miles or retreated into a more conservative or conservationist approach to jazz and its traditions? Or would he have been there with Braxton, Sam Rivers and others as part of New York's seventies loft scene? And how would people have reacted? I suspect it would have been a case of, "Well, it's okay but it's no A Love Supreme!"

I think artists such as Westbrook, Graham Collier, Mike Gibbs, Michael Garrick and many others suffer from our tendency to be always harking back to this, admittedly, first golden age of British jazz. That tendency stops us appreciating the later, more mature work of such individuals.

This is not something that happens in the world of classical music, which increasingly occupies much more of my time and attention. Take Dimitri Shostakovich. Are his gorgeous Fifth Symphony (1937) or epic Seventh (Leningrad) Symphony (1941) to be held in higher esteem than the high drama of the Thirteenth Symphony (1962) with its setting of poems by Yevtushenko, on some specious assumption that he must have been in his prime at the time of the earlier compositions? Incidentally, Shostakovich was thirty-one when he composed the Fifth. Westbrook, as it happens, was also thirty-one when he released his first album as leader, Celebration, in 1967.

I do love the music of the sixties and early seventies. Perhaps some of that is nostalgia but I also think it was a time of great openness musically, culturally, socially and politically. That openness had been lost, at least until recently. The willingness of a young audience (and not so young) to listen to jazz, folk, blues, soul, reggae and classical music, as well as rock was healthy for all these genres or ways of making music. And in writing Trad Dads, Dirty Boppers and Free Fusioneers, those other socio-cultural or culture-political aspects were equal in my considerations to that of the music. Both the art and the historical context are crucial.

But when I suggest that we may be in a similarly fruitful period of jazz in Britain with young musicians such as Nathaniel Facey, Kit Downes, Yazz Ahmed, Jack Davies and others, the very suggestion is pooh-poohed. Were I also to suggest that we might also be in a period when radical egalitarian political ideas are again in the ascendancy, the response would no doubt be the same. Perhaps the obstacles are greater and the corruption more obvious now, but when I demonstrated back then I did so alongside hundreds or thousands where I now march alongside tens or even hundreds of thousands. We need historical perspective to understand all aspects of life—musical, artistic, literary, political, social, economic and scientific. 'Golden age' thinking risks depriving us of the oxygen of critical thinking. And, in the Anglophone world, 'golden age' thinking has given us Trump and Brexit.

Some years ago, I was commissioned to write an article on Westbrook. The editor advised me to concentrate on the earlier records. I pointed out that Westbrook saw his later large and smaller scale albums as of equal stature. The reply, breathtakingly arrogant, was, "Oh, I'm not interested in those."

So, is Release or the astonishing Marching Song or The Last Night At The Old Place to be more highly regarded than Westbrook's London Bridge Is Broken Down (1986) or The Cortege (1983) or On Duke's Birthday (1985) or the lovely, hymn to nature Chanson Irresponsable (2003) or smaller conceits such as Art Wolf (2005) or The Serpent Hit (2013)? From reading the above, you will know my answer.

By all means, buy The Last Night at the Old Place. It is a valuable document of the time. For one, I hope there will be more such material appearing from the Cadillac archive. But not at the expense of greater, more significant, later works recorded by musicians who appeared on the label. These guys had a vision then and still keep it alive in the music they make today. Instead, let us, like Mike Westbrook (and Kate Westbrook) grow old together disgracefully.