By DAN MCCLENAGHAN
August 9, 2004
Sign in to view read count 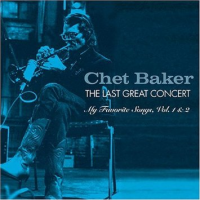 Trumpeter Chet Baker had his ups and downs. The ups: his groundbreaking work with baritone saxophonist Gerry Mulligan's pianoless quartet in the early to mid-fifties, followed by dozens of great early recordings under his own name. The downs: his long term involvement with drugs, which took him out of the picture for a stretch in the sixties. He made a successful comeback in the seventies, and by the time the Last Great Concert: My Favorite Songs, Vol. 1 & 2 was recorded in Germany in 1988, two weeks before his death, he was playing in top form again.

You'd think that after years of drug abuse and an erratic career that featured as many down-in-the-gutter interludes as it did soaring-in-the-clouds highs, Baker would have been in artistic ruins by 1988, when he was 58 years old, with the appearance of a man who'd lived every one of those years hard. But The Last Great Concert lives up to its billing.

Baker's horn sound was remarkably similar to that of early Miles Davis, 'round about '57, '58—playing mostly in the middle register with a soft, round tone, with an affinity for mid-tempo tunes with pretty melodies. Indeed, the set opens with Davis's "All Blues" and goes on to cover more songs from the late fifties Davis songbook: "My Funny Valentine," "Summertime," and "In Your Own Sweet Way."

The concert itself was a hugely ambitious project, given Baker's reputation for unreliability. To back Baker: a big band and a full orchestra on stage at the same time, in addition to a jazz quartet. Baker didn't show up for rehearsals, and he didn't arrive at the concert hall until the afternoon of the show. In spite of that, he—and by turns the orchestra and big band and quintet—sounds marvelous. Baker fits his solos into the arrangements seamlessly. Particularly fine are the songs featuring the Radio Orchestra Hanover. The arrangements are superb, less lush and more subtle than the work on his Columbia album Chet Baker with Strings. Baker must have played and recorded "My Funny Valentine" a thousand times. The first version here, with the orchestra, is a nine-minute triumph, and though he has to strain for the high notes on his vocal, a slightly ravaged charm underlies his guileless, haunted delivery. And "Django," the classic John Lewis tune, has Baker backed by the NDR Big Band as he melts his horn into the delicate melody.

The set is a reissue with remastered sound. It must have been an enormous headache to record, but the sound quality is great. A must listen for Chet Baker fans.

Disc 1: All Blues, My Funny Valentine, Well You Needn't, Summertime, In Your Own Sweet Way, Django, I Fall in Love Too Easily. Dis 2: Look for the silver Lining, I Get Along Without You Very Well, Conception, there's a Small Hotel, Sippin' at Bells, Tenderly, My Funny Valentine (reprise)