Carol Welsman: The Language Of Love 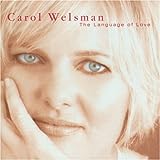 Carol Welsman’s love letter sends its message around the world. She sings in English, French, Italian and Portuguese on this album of treasured memories. Traces of tango, samba and bossa nova mingle casually with sensual ballads and traditional fare. Poignant arrangements of “A Nightingale Sang in Berkeley Square” and Sting’s “Every Breath You Take” sweep away the clouds and reveal a veteran vocalist with heart.

The Language Of Love is Welsman’s fifth album. Based in Toronto, and the granddaughter of Frank S. Welsman (founder and first conductor of the Toronto Symphony) has eluded the U.S. limelight. Until now.

Starting out as a piano performance major at Berklee and a vocal student of Christiane Legrand in Paris, Welsman has become fluent in several languages: French, Italian, and Jazz. Her vocal preferences lie in the mainstream: pure swing with genuine passion and traces of creative invention.

Welsman appears as comfortable with wordless scat singing as she does interpreting lyrics. Bongos and conga drums support her as casually as the guitars, bass and drums. Welsman’s piano accompaniment and brief solo sections enhance her vocal delivery, as do the other supporting instrumentalists. The album includes a lovely duet with Arnold McCuller on “Can’t Help Falling In Love.” But it’s the vocal impressions of Carol Welsman that take center stage on her Savoy Jazz debut. Recommended, this album heralds the arrival of an exquisite jazz singer to a wider audience.

Taking A Chance On Love; You Take Me Away; On a Slow Boat to China; A Nightingale Sang in Berkeley Square; Can