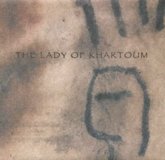 Here's music from two guitars that covers far more ground than that description may imply. Fewell and Hofbauer are both players acutely aware of the sonic potential their instrument has to offer, and that awareness is one of the many qualities that combine lift the music on The Lady Of Khartoum well above the run-of-the-mill.

"Comfort For An Affliction" starts quite literally from nothing other than silence, and such is its simultaneously reflective yet agitated air that the listener might well feel as though they're eavesdropping. The piece doesn't so much build as it kind of smolders, hinting at things more heated but failing to ignite. In a way this doesn't matter, as the music throughout this program seems to have long since left behind such relatively hackneyed considerations as heat in favor of less tangible, certainly more chimerical considerations.

In the past Fewell has worked with the perennially underrated John Tchicai, and the duo's reading of that man's "Farsighted Friendship" flirts with the notion of cool in a manner that falls far outside any known school of such a thing. The theme statement is shot through with understated grandeur and the duo's economy lends to the proceedings the kind of dignity that seems like an increasingly rare quality.

If set against it, the discordant undertow of "Ma'at's Mood" is reined in only by the very brevity of the piece, which at one minute and ten seconds is inevitably deprived of the chance to evolve. It seems such a waste in view of the fact that the duo seems incapable of coming up with anything half-baked, so intense yet reflective is their rapport. For all its relative agitation the same can be said for "Eyes Of Nkisi," where the spirit of Derek Bailey is summoned up but not echoed. Thankfully these guys are well beyond the emulatory approach.

Thelonious Monk's "Let's Cool One" is the one instance here when the jazz guitar tradition is overtly invoked, which in light of all the clean picking here is a feat in itself. The duo proves how well they can pull the trick off, however, by dint of the fact that their improvisation is free of overt influence, proving as if it needed to be proved that the tradition can only sustain its viability through revamping and revising.

It all adds up to something special in the sense that the very restricted tonal palette that two guitars can offer is effectively trumped by the wealth of ideas and the sharp musical reflexes of the two players concerned.

Prologue: Before the Dream; The Lady of Khartoum; Dogon Delta Blues; Comfort for an Affliction; Devil at the Salang Pass, Ma