Charles Evans: The King Of All Instruments 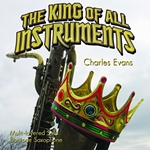 The compositions build on the innovations of past jazz baritone heroes, balancing composition and improvisation while managing not to lose their emotional impact despite the experimental tone. Echoes of formative influences on Evans, such as the surprising humor and inconsistent juxtaposition of composer Charles Ives, the wide and muscular tone of John Coltrane, the complex poly-tonality of Julius Hemphill and the sound of fellow World Saxophone Quartet founder Hamiet Bluiett, but Evans sound on this release is of a musician who has found his own true voice.

Evans begins with a slow and gentle soundscape where he explores the altissimo register of the baritone. In the next two short pieces he uses swift fingerings of the keys to explore pitch and timbre. Evans dedicates two beautiful polytonal pieces, "Junie Part I & II" to his father and his best friend which refrain from sentimentality with a restrained articulation. He also dedicates the most experimental composition, "It's the Right Toe, Bro" to his former teacher and mentor Liebman, who quoted as saying that "he is exploring a mere toe from the body of Coltrane." Here Evans navigates through a loose harmonic framework that contains slides into dissonant clusters and drone layers like the sound of electronic white noise.

"A Deya in the Life of Mulligan" is a melodic, multi-layered meditation that suggests the elegant and subtle tone of the late baritone master, Gerry Mulligan. "Mother and Others" is another emotional dedication but here Evans uses dynamic multiphonics, squeals and a much rougher tone that engulfs a recognizable theme. Evans concludes this impressive release with the playful "What would of Ives," dedicated to the memory of his first teacher on the baritone, Bill Zaccagni, and references the sound worlds of composer Charles Ives. A fitting summation to all aspects of the baritone heard in this release.