Joanie Pallatto & King Fleming: The King and I

By DAVE NATHAN
December 1, 2000
Sign in to view read count 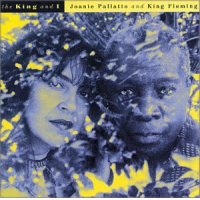 King Fleming's first recorded session was held in December of 1945 where he appeared as a sideman playing pianist for Wynonie "Blues" Harris with Johnny Alston & his All Stars. But even prior to that, Fleming is reputed to have had his own band as early as 1939! Shades of Benny Carter. He made some albums for Chess/Argo in the 1950's and 60's. and appeared on some albums of the fine singer, Lorez Alexandria, as well as recording with Sonny Till and the Orioles. In fact, one of the tunes is a composition Fleming composed with Alexandria, "My Very First Love" where Chicago jazz institution, Von Freeman makes a strong statement on tenor. Freeman manages to show up on many Southport releases, but unfortunately usually only for a cut or two.

On this second session for Chicago's Southport label not only is Fleming's piano artistry on display, but he composed ten of the fourteen items on the play list. He's joined on this set by vocalist, record company executive and lyricist - she provides the words for five of Fleming's tunes - - Joanie Pallatto. The way Fleming and Pallatto work together, the title of this album could just as easily been called "The Glove and the Hand" because they fit together so comfortably and confidently. The coolness of Pallatto's delivery and the melodic crispness of Fleming's piano seem to have been preordained for each other. Add as adornments some of Chicago's finest jazz performers and the result is a musical wardrobe befitting Vogue or Elle.

The musical agenda is a varied one apropos of Fleming's long experience as a jazz musician. Fleming likes to work with exotic themes like those which dominate "Overt" and "Opportunity for Love". The former is strictly instrumental and is the stage for a languid, soprano sax solo by Rich Fudoli. The latter features Fudoli's haunting flute which, along with Pallatto wordless vocalizing, create the sounds of the jungle. On another Fleming tune, "Bypass", the "instrumental" solo with Fleming's piano and Clifford Griffin's bass, is Pallatto's wordless vocalizing simulating an alto horn. But there's straight ahead jazz as well on "Eastgate" with Pallatto's swinging scatting bolstered by Fleming's bouncing piano. Fleming's romantic piano is front and center on a lovely ballad "Pen Point", with Griffin's bass strumming providing a soft cushion onto which Fleming's notes gently land. There's just enough standard material on the program to provide the necessary balance to the play list. Pallatto is joined by Fleming on vocal on "Somebody Loves Me", with Bobby Lewis doing solid work on the muted trumpet.

The album is representative of the backbone of jazz. Not groundbreaking, but dependable and durable performance of original jazz compositions mixed with familiar standards performed by musicians who really know what they are doing. Highly recommended.

You're Driving Me Crazy; Moody; Somebody Loves Me; Opportunity for Love; Eastgate; My Very First Love; Overt; Bypass; Snow Storm; Oooo, Those Blues; Pen Point; A Beautiful Friendship; You, and Only You; Adios