The King and Dr. Nick: What Really Happened to Elvis and Me 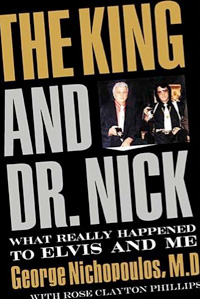 Dr. Conrad Murray, singer Michael Jackson's personal physician, is (in February 2010) under scrutiny for his part in Jackson's October 2009 death, for allegedly providing Jackson with the drugs that contributed to his end. Between 1977 and 1980, Memphis internist Dr. George Nichopoulos found himself in the exact same place as the personal physician of another self-destructive international superstar, singer Elvis Presley. The parallel between the Presley and Jackson deaths close Nichopoulos's The King and Dr. Nick: What Really Happened to Elvis and Me.

While acquitted of all wrongdoing in the death of Presley in 1980, Nichopoulos was disciplined by the Tennessee Medical Board for over-prescribing drugs for Presley, and in 1995 lost his license to practice medicine permanently for his over- prescription of federally controlled substances to his contemporary patients. Nichopoulos was acquitted of wrongdoing in Presley's death because his motive was to try to contain and reduce Presley's drug dependency, thus acting benevolently toward is patient. While his intentions were good, his efforts were tantamount to trying to direct a tornado, with the expected outcome.

Nichopoulos' memoir details his relationship with Presley from 1967 until the his death and the subsequent the arc of his own life. The picture that appears is not of a pocket doctor providing drugs to his famous junky patient, but that of a concerned physician recognizing the implacable situation of drug addiction in a powerful and wealthy individual. Nichopoulos never fully commits to Presley's "drug addiction," citing a myriad of heath problems the singer had necessitating pharmacologic intervention. That Presley was "chemically dependent" with all of the requisite baggage that phrase implies, should be beyond question. As Nichopoulos' sincere desire to help Presley was.

The heart of the book is the fate befalling Nichopoulos after Presley's death. Had Presley been a person of little notoriety, he would have been buried these 35 years and Dr. Nichopoulos would have concluded an esteemed career and would be enjoying his retirement. Presley wasn't a person of little notoriety, however, but the man most often credited with the evolutionary push of rock 'n' roll into "popular music."

With painstaking detail, Nichopoulos describes his systematic ruin by an overzealous and malignant media (who at the time were much more tame than the present 24-hour circle jerk we endure today) in cahoots with local Memphis medical establishment and politics. Central to the media's pursuit of Nichopoulos was the difference of opinion between Baptist Hospital's pathologists and the Memphis medical examiner, one offering a cardiac diagnosis and the other death by polypharmacy. It was the second of these that hung up Nichopoulos. Presley did have an impressive amount and number of drugs detected on his tox screen, but all were accounted for by Nichopoulos in his treatment of Presley's famous insomnia.

What followed this course of consideration was a 20 year battle in the courts that ruined Nichopoulos. If Nichopoulos' guilt or innocence was based on Presley dying of a drug overdose, then Dr. Nichopoulos was ill served by the justice system. Because Elvis Presley did not die from a drug overdose.

Did drugs contribute to Presley's death? Presley died from the consequences of a self-indulgent lifestyle that famously knew no moderation. Food, sex, drugs and people, Presley consumed all prodigiously. He was many things: an artist, an icon, a trend-setter, a philanthropist, a father, a husband, a man. What he was not was a man-child, with no free-will of his own, who was managed by a committee of other people. Like Michael Jackson after him, Elvis Presley was responsible for his death, not Dr. Nichopoulos nor Dr. Murray nor anyone else.

Famous, rich and chemically dependent make for a Titanic result when any half- measures are applied such as trying to moderate the afflicted person's drug intake as a method of managing addiction. When Presley started to sink, he created a vortex that pulled all of those close to him down with him. Nichopoulos swirled the vortex amongst them. One of Nichopoulos' greatest fears was of the damage done to Presley's reputation and memory. An observer need only tour Graceland once to know that 35 years after his death, for many people Elvis Presley is still The King.