On March 7th, with a stiff northerly wind blowing the flags straight out from the flag pole outside the Douglas Beach House and under a gray coastal sky, legendary jazz sax-man Sir Edward Kidd Jordan led his quartet consisting of Eddie Gale on trumpet, Warren Smith on drums, William Parker on bass onto the stage of the famous jazz venue (aka Bach Dancing and Dynamite Society) to take the audience on a voyage into the rarefied stratosphere of free jazz. This was a special day: producer and proprietor Pete Douglas had not planned to book a show on that date, but when he heard that Kidd would be coming into the San Francisco Bay Area from his home base in New Orleans and that William Parker and Warren Smith would be coming in from New York City to play with him, it was an opportunity to include Eddie Gale and have these four masters play to an audience that, for the most part, was ready, willing and able to have their jazz minds and hearts stretched to the edges of free jazz. 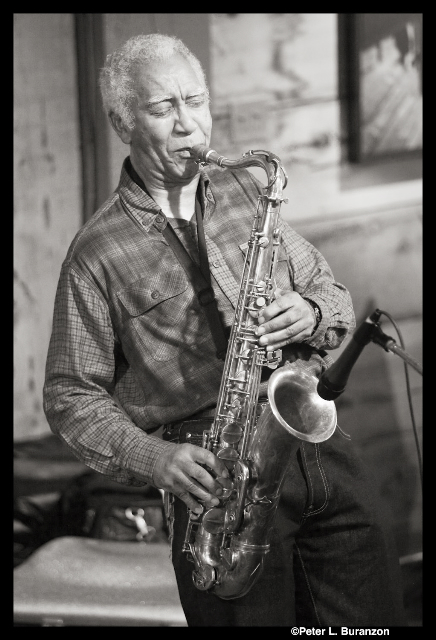 Sometimes it's difficult for mainstream listeners to appreciate jazz that goes to extremes, lays down a melody, then improvises over and increasingly away from it. For instance, Jordan has a tendency to hit a bass line on his tenor sax, rip up the keys to a shrill high note and then tumble back down. He and master trumpet-man Eddie Gale played off of one another, running the scales up and down, musically calling back and forth to each other. Meanwhile, Parker thrummed out the bass beat while Smith's drums kept the unit solidly grounded. At other times the quartet was so soulful that the music drew everyone in. Smith played with mallets and brushes, sometimes using the drum's rims to tap out the time, while Gale on muted trumpet complemented William Parker bowing his bass. During his solos Parker often flipped his hand down the strings instead of using his fingers to change notes. With all of this individualism, these masters nevertheless blended in a dynamic quartet, presenting to the audience the soulful cry of their instruments.

And yet, when the audience returned from the intermission, there were a few empty seats left by people who could not accept the music's extremes. As the second set opened, Kidd Jordan asked keyboardist and pianist David Leikam to take the Grand Steinway Piano and join them. He was honored to do so. Since the piano had not been miked, Jordan shifted closer to the piano so that he could hear Leikam better. Once the pianist had established the "melody," he and Jordan played off of one another, bouncing back and forth until Eddie Gale soared in, and then the piece took off, only to land some nine minutes later with a thunderous piano finale and hearty applause from the audience.

Finally, the quartet ended the program with "When the Saints Go Marching In," done in a fashion that only this unit could possibly accomplish—heading for the stratosphere, then coming back to Earth to touch base with the melody as a reminder, and then soaring off in another direction like birds playing over the landscape. Just before the last few bars the audience rose to its feet and gave these fine musicians joyous response with applause and cheers along with comments thrown in here and there. It is a rare treat to see and hear such seasoned legends take the stage and give their audience the best in free jazz available today.