The Justin Varnes Orchestra's Rhapsody In Blue At The Jazz Corner 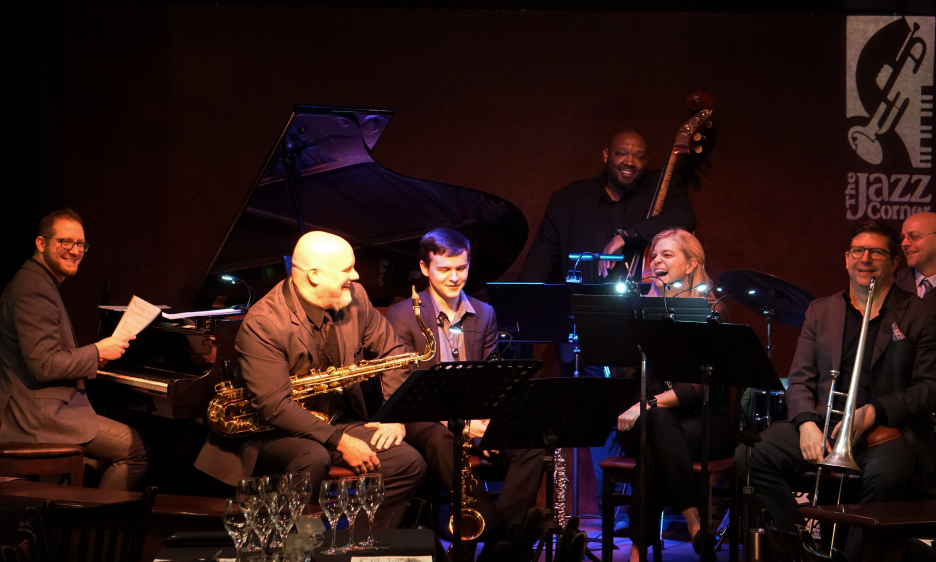 By MARTIN MCFIE
May 21, 2019
Sign in to view read count
The Justin Varnes Orchestra
The Jazz Corner Rhapsody in Blue
Hilton Head Island, SC
May 12, 2019

For Mother's Day luncheon, The Jazz Corner presented another in their "Classical meets Jazz" series of concerts, "Rhapsody in Blue."

The opening clarinet trill, a scale, then the slowly extruded glissando had the edgy, haunting quality of an emergency siren winding up to announce the theme. The opening measures of "Rhapsody in Blue" may be the best loved music ever written for clarinet. Luke Weathington certainly enjoyed the upward slide and stated the theme with all the clarity it deserves. The trombone restated the theme before Grace Kawamura sketched in a dramatic violin phrase supported by the orchestra. The lone piano voice from Nick Rosen set the New York scene by rolling repeated runs up the keys. The chords marched out, evoking the impossible grandeur of New York skyscrapers and the city bustle below, all couched in a European musical finesse.

George Gershwin wrote "Rhapsody in Blue" (titled initially "American Rhapsody") under considerable pressure from Paul Whiteman, styled the "King of Jazz," whose dance band was the most popular in the country, even though his sobriquet was often disputed because of his lack of improvisation. Duke Ellington however, in his biography thought the title deserved. Whiteman announced the debut of a new rhapsody in the New York Tribune obliging Gershwin to deliver on a forgotten commission in just five weeks. Ferde Grofe, who was Whiteman's musical arranger, assisted with the orchestration. Gershwin was later attributed with the quote "I heard it as a sort of kaleidoscope of America" as he traveled to the beat of train wheels on the track from New York to Boston.

Gershwin was a concert level pianist, so the bridge between European classical and jazz music wasn't a leap into unknown territory for him. On the opening night, February 12th 1924, in front of none other than classical composer Rachmaninov, Gershwin was still improvising some piano parts. Nick Rosen played the club's new Yamaha for this performance, with enthusiasm and precision, leaning forwards into the keys with hunched determination.

The Justin Varnes Orchestra included John Sandfort on tenor saxophone, and was supplemented by Grace Kawamura, who alone suggested the salient highlights of the violin parts of the score.

Varnes himself arranged this version, so it had his barely perceptible Southern undertone in places. He also carried the complicated variations of time and rhythm on drums. In his professional teaching role, Varnes gave a brief history of the music and his approach to this arrangement. He gave an informative look behind the curtain at the amount of work required to deliver an excellent rendition of this deceptively unstructured and fluid music.

This was not a new jazz score built on top of a classical piece of 18th century orchestral music as presented before in this series; this was a new arrangement of a score which had already crossed over the Rubicon river into jazz from its inception. Rhapsody, in this sense, means a piece of music without structure or form but filled with feeling, emotion, and ecstatic energy. The music danced lithely from fast to slow, from piano to forte, building and retreating, ebbing and flowing with no warning, keeping the listener always alert for changes of direction.

Lois Masteller, the owner of the Jazz Corner, commented "Our 'Classical meets Jazz' series of lunches has proved popular over the last year, they sell out in days. This enduring piece of Americana was received with a well-deserved standing ovation from the audience."

There was a point about three-quarters of the way through the performance, at which the music appeared to flag and stall out, losing power. This was a deception; it was the lull before the storm of the heroic ending.