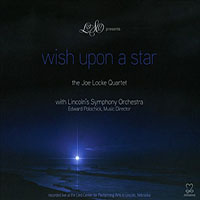 When Joe Locke signed with Motéma Records in 2012, the vibraphonist was finally allowed an opportunity to more freely explore a broader range of interests, bolstered by the comfort of his affiliation with a label known for its strong artist support. His first release for the label, Signing (2012), was the long overdue follow-up to The Joe Locke / Geoffrey Keezer Group's tremendous debut, Live in Seattle (Origin, 2006), and despite being unjustly overlooked in some quarters was, without a doubt, one of the year's best records—a potent combination of collective telepathy, finessed fire, contemporary grooves and elegant lyricism. With Wish Upon a Star, Locke explores his more decidedly lyrical side in this ambitious collaboration with the Symphony Orchestra of Lincoln, Nebraska.

An odd place, perhaps, to find a world class orchestra but, under the musical direction of Edward Polochick, clearly one capable of not just playing the arrangements provided by Locke's pianist on the date, Ryan Cohan, and British saxophonist Tim Garland—with whom the vibraphonist has collaborated for more than a decade in the Storms/Nocturnes Trio, last heard on the superb VIA (Origin, 2011)—but actually breathing life into them. That Locke's quartet, the orchestra and Polochick managed to nail these three standards and three originals by Locke (two) and Garland (one) in just one-and-a-half rehearsals and a single concert performance speaks to the strength and commitment of everyone involved.

The set opens with Garland's arrangement of Locke's balladic "Available in Blue," first heard on the vibraphonist's Force of Four (Origin, 2008), another piano-based quartet record. Here, however, Garland takes Locke's whisper-like rubato original and not only expands it thematically and texturally, but puts it in time, which allows for greater dynamic development, especially as Locke's opening solo grows in strength and virtuosity to a wonderful midpoint climax, setting the stage for Cohan's solo of similar sophistication and improvisational focus. Whether they're playing a great many notes or just a few, every single one counts: no more or less than the song demands.

Jazz collaborations with orchestras often succumb to saccharine melodrama, and while some of these arrangements are, indeed, sweet none of them fall prey to manipulative sentimentality; instead, on these absolutely honest arrangements and performances, both Cohan and Garland expertly employ the diverse textures available to them. Cohan's arrangement of Locke's "Sword of Whispers"—first heard on the vibraphonist's duo record with fellow mallet man (and, originally, student), Christos Rafalides, Van Gogh By Numbers (Wire Walker, 2006), but given a fuller group treatment the following year on his guitar-centric Sticks and Strings (Music Eyes)—builds on motifs from the original to create an introduction that, blending strings, woodwinds and brass, is an enticing setup for the entry of Locke's quartet, fleshed out by bassist Lorin Cohen and drummer Carmen Intorre, who was last seen tearing it up with guitarist Pat Martino at the 2012 Umeå Jazz Festival. Here, Intorre propels the music, to be sure, but in a more integrated fashion that understands and meshes with this much larger context.

Wish Upon a Star may be largely balladic—a precursor to Locke's next Motéma project, which will be a blues and ballads disc featuring the same quartet as here, but with Jaimeo Brown replacing Intorre in the drum chair—but Cohan's arrangement of this album's titular "When You Wish Upon a Star," from the 1940 Walt Disney classic Pinocchio, gives the group a chance to shoot for a more overt energy, especially in the double-time bridge and solo section, where Locke delivers his fieriest salvo of the set.

Elsewhere, "Where is Love?," from the Broadway musical Oliver!, is an album highlight through Garland's impeccable use of the symphony orchestra to create a clear narrative, meshing seamlessly with the quartet, making this not so much "jazz group with orchestra" as it is a large ensemble record with a core quartet. It may be splitting hairs, but it's an important distinction.

The album closes with Garland's arrangement of his own delicate "The Moon for Her"— first recorded on his Made by Walking (Stretch, 2000) as a piano/bass duet that only expands to a trio when Garland's enters on soprano saxophone at its midpoint; and further expanded for 3 Dimensions (Audio-B, 2008), from Garland's collaborative Acoustic Triangle trio, in this case augmented with a six-piece string ensemble. In both instances, the relative miniature was completely through-composed; here, its contrapuntal theme is harmonically expanded and given a new midsection to allow for another set-defining solo from Locke, and an outro that, turning rubato, features a brief a cappella spot for the vibraphonist that leads to a tranquil conclusion, ending Upon a Star with a whisper rather than a bang.

Despite Locke being, for the most part, the album's featured soloist, this is clearly a collaboration of equals, between the vibraphonist and his quartet, arrangers Cohan and Garland, and Lincoln's Symphony Orchestra's Polochick. Wish Upon a Star is proof positive that dreams can come true and, for the youthful fifty- something vibraphonist, that things always happen for a reason. It's the very confluence of experiences that brings us to where we are in life; Wish Upon a Star might have been made in years past, but it simply wouldn't have been the unbridled, unequivocal and unmitigated success that it now is.

Available in Blue; When You Wish Upon a Star; Sword of Whispers; Where is Love?; Moon River; The Moon for Her.