The Joe Doubleday Quartet at The Jazz Corner 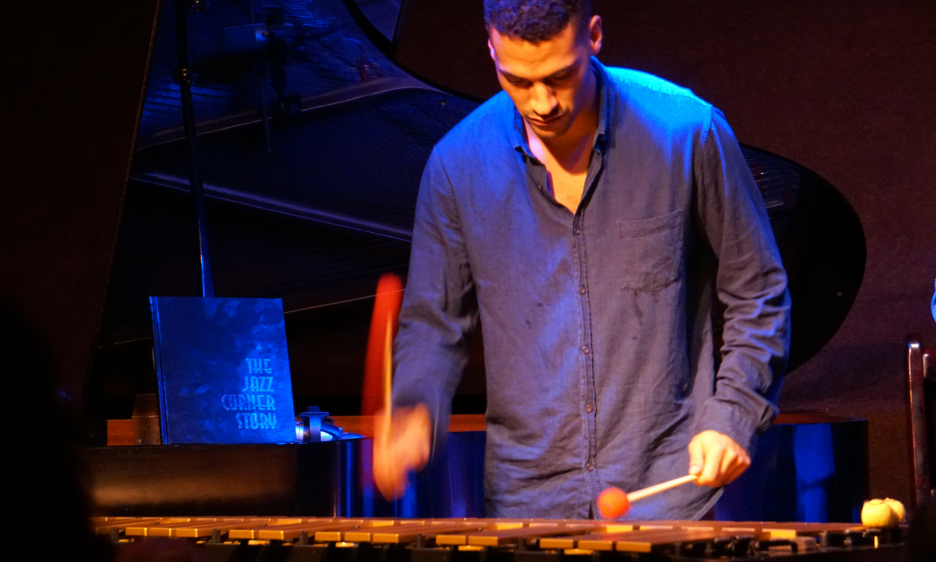 Born in Oklahoma, Joseph Doubleday graduated from Berklee and won a masters from Julliard so he is Dr. Joseph Doubleday, a man working hard to emulate the music of Lionel Hampton, always learning while achieving his own style. With him on sharp, clean and expressive piano came Gerard McDowell, on bass Karl Kohut and on drums Dag Marlchus.

Doubleday formerly shared a Showtime band with Norwegian clarinetist Felix Piekli who has since moved away from New York City. As is now apparent, two headliners on stage made their music crowded both in space and talent. Now Doubleday, a front line two-mallet player, appeared to have more freedom and delivered excitement and bold strikes to the house vibraphone. He varied the motor speed to give more reverb when the resonator pedal was depressed, creating that special soft vibe, ringing and echoing sound in the slow numbers.

They played an Oscar Hammerstein and Sigmund Romberg 1928 composition from an operetta "The New Moon." The song title tells us all we need to know about the mood and gentle beauty of this music, "Softly, as in a Morning Sunrise." The quartet followed on with a 1940s film score theme by Victor Young with later lyrics by Ned Washington; Frank Sinatra took "Stella by Starlight" into the charts in 1952 and Charlie Parker with a full orchestra and strings, made the first jazz recording. Since then a panoply of artists have recorded both instrumental and vocal versions to make this one of the most popular standards in the jazz repertoire.

Doubleday's idol Lionel Hampton wrote the next tune, "Red Top" with Ben Kynard and featured it regularly with his big band. Then, the Doubleday Quartet played another standard because music from the Great American songbook seems to fit the vibes so well. This time, the selection was the 1930 song "Body and Soul" played and sung by all, but forever remembered in perhaps the definitive version by Billie Holiday. It was actually written in New York City by Johnny Green with lyrics by Edward Heyman for Gertrude Lawrence.

The Joe Doubleday Quartet did a fine job matching the feel of the songbook era, tinged with the melancholy of wartime. Then, they lit the fire, he cut the reverb and the notes just flew out of the vibes in a torrent.