The Jist: The Jist 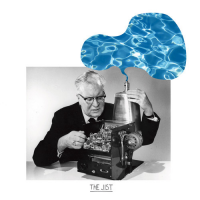 The Norwegian duo The Jist—vocal artists and electronics player Natalie Sandtorv, and guitarist Torgeir Hovden Standal—take the experimental concept of improvised meetings between innovative vocal artists and guitarists to its noisy extremes. This concept was pioneered by the master vocal artist Sidsel Endresen and highly inventive guitarist Stian Westrhus (Didyomi Dreams, Rune Grammofon, 2012) and later was presented in a much gentler, still highly poetic version, by vocalist Hanna Gjermundrød and genre-blind guitarist Petter Vågan (Renedition Of A Whisper, Gigafon, 2013).

Sandtrov and Standall were born and raised in the same town in the western part of Norway but met in Oslo in 2011. The two wanted to explore sonically the implications of distressed urban life in the big city. The duo's self-titled debut was recorded after two years of exploring and articulating a highly original language, employed with alternative approaches to their instruments in order to sketch dynamic, free-improvised soundscapes.

The Jist flirts with metal and noise elements and are not shy of building concrete walls of disturbing, torturous noises, but their approach is more diverse and versatile of common noise or metal outfits. Sandtrov, in a commanding vocal attitude that owes much to Endresen but also to Maja S.K. Ratkje, recites, whispers, moans and shouts imaginary wild, often horrific, tales, but with a playful sense of drama, even with bursts of weird sensuality and dark humor, as the titles of the pieces suggest. The subversive, merciless guitar sounds of Standal intensify the claustrophobic experience of Sandtrov's thick stories, enrich these stories with a sense of imminent urgency, where towering walls of threatening sounds are about to close on the listener.

The six arresting pieces are just the gist of The Jist, small part of the hours of material recorded in two days in Bergen with John Hegre, known as a member in the noise duo Jazkamer (with Lasse Marhaug who contributed his uncompromising approach to the sound of many Va Fongool releases} and guitarist in the metal trio Noxagt. Hegre captured faithfully the raw, intense and brutal sound of The Jist. As on other releases of Va Fongool, the design of the impressive cover was given to young promising artist, Henrik Koppen.

The Jist offers an effective and powerful medicine to the distressed ones who are look for a meaningful sonic experience in modern, urban life.