By MIKE PERCIACCANTE
September 7, 2013
Sign in to view read count 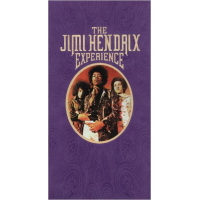 Originally released in 2000 on Sony/Legacy, the Jimi Hendrix Experience box set featured 56 then-previously unreleased concert and studio recordings that spanned the late guitarist's career, covering the years 1966 through 1970. The box set has been hailed as one of the best multi-disc compilations ever released.

The 2013 edition of the four-CD set has been expanded to include four additional tracks, including: a live performance of Bob Dylan's "Like A Rolling Stone," recorded at San Francisco's Winterland in October 1968; the unreleased original version of "Peace In Mississippi" (which had previously only been available as b-side of the "Valleys Of Neptune" single); a recently unearthed performance of "Burning Of The Midnight Lamp"; and the original UK single mix of "The Stars That Play With Laughing Sam's Dice."

Featuring an 80-page book filled with rare photos, essays and annotation by Dave Marsh and John McDermott, the collection—which was becoming increasingly hard to find—is a must for Hendrix devotees, offering a glimpse into the musical world of Jimi Hendrix, annotating and documenting all the tracks while including recording studio log sheets as well as reproductions of newspaper articles, poster/flyers and handwritten lyrics.

The music, however, is what makes this set required listening. Highlights include the "Jimified" versions of Chuck Berry's "Johnny B. Goode," Carl Perkins' "Blue Suede Shoes"—made famous by Elvis Presley, who played it live on television in 1956 on The Milton Berle Show and The Steve Allen Show—The Beatles' "Sgt. Pepper's Lonely Hearts Club Band," and, of course, Dylan's " Like A Rolling Stone" and "All Along The Watchtower." Combining these incandescent live covers and live performances from the "classic" Hendrix catalogue like "Voodoo Chile," "Purple Haze" and "Little Wing" with the inclusion of posthumously released tracks from In the West (Polydor, 1972), Rainbow Bridge (Reprise, 1971) and the originally recorded versions of the tracks that found their way onto Crash Landing (Reprise, 1975) gives this collection a fly-on-the-wall perspective and look into the man's muse. It also provides insight into the evolutionary trajectory that Hendrix's music might have taken.

What makes the collection invaluable are the studio outtakes and previously unreleased alternative versions of tracks like "Purple Haze," "Third Stone From the Sun," "Foxey Lady and "Hey Joe." Listening to these tracks allows for an understanding and rarely seen peek into Hendrix' creative and recording process. This is most clearly seen in the early outtakes that also feature control room banter and in some cases just the slightest friction between the players and the production team.