By DOUG COLLETTE
January 12, 2008
Sign in to view read count 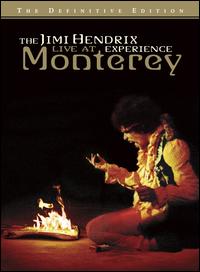 The cover photo of this elaborate colorful package, an image of Hendrix lighting up his guitar at the 1967 Monterey Pop Festival, is more than evocative of an inflammatory musician famous for torching his guitars. It's also representative of the colorful content and varied bonus features in the DVD set as well as the corresponding audio package.

The late guitar icon's performance is placed in the context of the Monterey Festival as a watershed event on its own terms. The liner notes detail the process of organization as the three-day festival was organized, while the bonus video "American Landing" homes in on The Jimi Hendrix Experience's route to this point in their history. Therein lies the palpable sense of suspense one experiences watching the DVD: the concert footage begins almost abruptly and invites us to follow its course to the final bars.

As the viewer will discover, revelations abound throughout, albeit with the benefit of hindsight. The trio opens with a slashing run through "Killing Floor" by Howlin' Wolf, later escalating the intensity of the set even more with "Rock Me Baby." An emphatic rendition of Bob Dylan's "Like A Rolling Stone" serves as a reminder of how, even early in his career, Hendrix had a finely-honed command of dynamics: here the muted verses play off the rousing refrain. Compare this footage with film of one of the Experience's earliest performances of February of this same year in London: they eschew flamboyance altogether, except for the fashionable attire of the times introduced prior to the performance footage itself.

The interview content dominated by Monterey festival organizer Lou Adler puts the festival itself in perspective. Holding the event at the home of Monterey Jazz Festival lent legitimacy to the festival and, by extension, to rock music itself. When mention of stage manager Chip Monck is made, and then, closely upon its heels, a reference to Woodstock 1969, the implication is obvious: Monterey was the first true rock festival.

Long-time Hendrix collaborator Mitch Mitchell may frame the 1967 circumstances best. In his essay in the DVD booklet, the drummer sounds grateful, though bittersweetly so, for the break the Monterey appearance represented for the bandmembers, its leader and Mitchell himself. The reflections on Monterey's impact are further noteworthy in that it was just over two years later that Hendrix would be playing the Woodstock festival in an attempt to move beyond the showmanship that had begun to overshadow his musicianship in the public's mind since the Monterey event.

Cinematographer D.A. Pennebaker captured the California audience in alternately wide-eyed rhapsody and (seemingly) dumbfounded amazement at Hendrix' theatrics. The antics that included guitar played behind the back weren't all that new because bluesman Buddy Guy, to name just one, had engaged in similar actions. Yet Hendrix took it a step further at Monterey, again in direct contrast to a performance from a black and white source from February of that year in a London club: in the latter clip his turning toward the stack of Marshall amps for feedback's sake makes musical sense, while his pretending to hump the equipment in California, then burning the guitar before smashing it at the end of "Wild Thing" seems more than just a logical extension of those gestures.

Multi-angles available on selected performances within the set list allow reverse zooming to full-stage view, POV from behind Mitchell and extending across stage from Redding to Hendrix. This feature grants the spectator a close simulation of moving around the festival grounds in relation to the stage. Purists may quibble with the apparent rearrangement of D.A. Pennebaker's original footage but it constitutes all the concert video proper. And, as presented here, it ultimately, and rightly, focuses on Hendrix himself.

It's testimony to the film editor's sensory stimulation that the audio quality of Live at Monterey calls attention to itself only late in this forty-plus minute set. This despite the festival organizer's wishes to raise the technical production of the music itself up another notch. Returning to the b&w footage and hearing the mono blare there is helpful to appreciate the yeoman's work done by engineer Eddie Kramer on forty-year- old tapes.

To be fair, there is not a lot of bottom, but then bassist Noel Redding was a transformed guitarist and didn't use a lot of low notes. Separation is somewhat lacking too, but there is enough proportionate depth between Mitch Mitchell's' drums and Hendrix' guitar, the two primary components of the sound.The latter especially, even in the comparatively low-key of "The Wind Cries Mary, has a palpable cutting edge.

The presence of an additional track on the corresponding audio CD—containing the entire performance in that format—is not mere mercenary marketing either: "Can You See Me was never captured on video. Kramer, Hendrix' engineer for much of his later work, does a practically remarkable job sculpting 5.1 and stereo mixes from the source; Wally Heider's recording itself was a step above the usual facilities and deliberately so, as noted by Monterey co-producer Lou Adler in the DVD interview: these performers were getting a higher quality of support in keeping with the novel concept of the festival.

It's only after noticing his repeated hurried comments (including his sputtered expression of gratitude) that it may dawn on a viewer how nervous Jimi Hendrix must have been at his American homecoming. But the authority with which he played, not to mention the psychedelic superstud persona he enacted, gives little evidence he was anything but exactly sure of what he wanted to do. Only Pete Townshend's (The Who) account of how Hendrix gave him a dare to determine which of the two acts would follow the other at Monterey Pop provides any insight into that aspect of this event.

The absence of more such pertinent perspective is this package's few shortfalls, and it's a minor one to be sure. It's more than amply balanced by the visual inventiveness of the DVD medium, not to mention the flashy nature of the content itself. As a result, there's an underlying irony to The Jimi Hendrix Experience Live at Monterey that's impossible to ignore, particularly if you're familiar with the more experimental avenues the leader sought out later in his career. The image portrayed here via "Foxy Lady" and "Purple Haze" is the prevailing impression of the man, exactly that which he would later fight as he worked to progress as a musician prior to his untimely death in 1970. There is no denying he got our attention, though, and no doubt he deserved it once he did.