By VICTOR VERNEY
January 9, 2013
Sign in to view read count 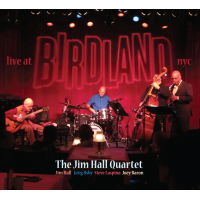 Guitarist Jim Hall, now in his eighth decade, continues to be a vigorous performer, fresh-minded arranger and creative composer. He's been around so long, and done so much, that it's humbling to try writing something fresh about him: there is little to say that hasn't already been said, and in many cases quite eloquently.

All these elements are displayed on his latest release, recorded live at New York City's legendary Birdland on November 10 and 11, 2010 with alto saxophonist Greg Osby, bassist Steve LaSpina, and drummer Joey Baron.

A defining quality of Hall, much remarked-upon, is lack of egotism. His musical style is a direct extension of his personality, marked by understated, self-effacing humor. Hall's British fans, who like that sort of thing, have dubbed him "The Quiet American" (with apologies to Graham Greene).

It's never just about Hall, even when he's the bandleader, as this performance illustrates. The term "context-driven" is less than elegant, perhaps, but does encompass Hall's fondness for live recordings, when acoustic limitations are compensated by warmth and intimacy.

Always worth mentioning is the sheer variety of stellar jazz performers with whom Hall has collaborated successfully. It's difficult to imagine artists more dissimilar than singer Ella Fitzgerald and saxophonist Ornette Coleman, two of the diverse players in Hall's discography. As co-leader or sideman, he has fully entered the spirit of others' music, combining virtuosity with selflessness.

The cleverly-titled "Furnished Flats" opens with a laughing, descending guitar phrase, and Hall shows how to play "free" without being formless. His bandmates follow suit in a rollicking fashion that recalls the Latin term "discordia concors" (i.e. harmonious discord).

The Jerome Kern standard "All the Things You Are" is a staple of Hall's repertoire because it's his wife's favorite tune, he tells us. This interesting arrangement combines the comfort of a familiar pattern with the occasional pleasant surprise. Following Hall's unaccompanied introduction, LaSpina's interactive bass is more duet partner than accompaniment. Osby and LaSpina take lyrical solos before Hall returns with some additional thoughts prior to a gorgeous ending.

"Friendly Recollections," co-written by Hall and Baron, is a free- time, back-and-forth exchange demonstrating the former's command of harmonic techniques and the latter's conversational approach.

Hall's early recordings with saxophonist Paul Desmond, for example, showed his spacious, relaxed approach well-suited to Brazilian music, in which he immersed himself following a 1959 tour of that country backing Fitzgerald. "Beija Flor"("Hummingbird") was composed by Nelson Cavaquinho, an important figure little-known outside Brazil. This choro features LaSpina's richly improvised line over Hall's counter-melody.

One blogger refers to Hall as the "undisputed heavyweight champ of jazz guitar," an accolade, however complimentary, that would probably make his saxophonist a bit uncomfortable. Osby, who has played with Hall since the mid-1990s, decries what he terms the "macho approach" of jazz's "boy's club mentality," which he contrasts to Hall's "less is more" aesthetic.

While Osby feels that playing with Hall demands sensitivity and restraint, that doesn't preclude exuberant fun, as seen in "Big Blues." What starts out as a twelve-bar blues becomes much more before it's through; Osby's witty solo includes a passing reference to "Rhapsody in Blue." On Billy Strayhorn's ballad "Chelsea Bridge," he sets a tone of unabashed romanticism nicely augmented by three colleagues unwilling to settle for conventional time-marking.

The calypso romp "St. Thomas" is, of course, a nod to a previous employer. It's propelled at a lively clip by Baron, whose melodicism on the traps evokes steel drums, while Osby pulls things apart and puts them back together in the best Sonny Rollins tradition.

This is Hall's fifth recording since 2005 with ArtistShare, a Web- based, fan-funded enterprise (see Brian Lonergan's informative AAJ article). Having marked its tenth anniversary in late 2012, ArtistShare has demonstrated its viability as a 21st century platform. At age 81, Hall is the Elder Statesman of a growing number of forward-minded musicians who have embraced this innovative way to sustain recorded jazz in the Cyber Age.