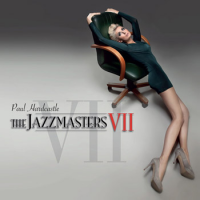 Jazz: noun, often attributive \'jaz\ a type of American music with lively rhythms and melodies that are often made up by musicians as they play

Jazz. Say the word. J-A-Z-Z. Paul Hardcastle calls his side project "The Jazzmasters." If he means he plays instrumentals, it is. If he means truly understanding the idiom, it's not.

The not-so Secret Sauce of Hardcastle's success is his music is designed, calculated, formulated and manufactured so as not to deviate from the template. There is no discernible difference between a Jazzmasters release and a Hardcastle solo joint. They are interchangeable and the sound faithfully follows Hardcastle's freeze-dried jazz/chill formula. This sort of Tinker Toy, generic pap is popular in the same way McDonald's french fries are popular: all the consumer must do is consume. Whether it provides any nutritional value is purely secondary.

The titles are generic. "Unlimited Love," "Soft Rain" and "Starlight Express" sound like names for bottles of perfume. Songs start, stop tinkle quietly and fade away. There isn't a single hook or a spontaneous moment. There are no twists, no turns, no diversion, no digression, and no deviation, only cold efficiency.

If you're a fan of this sort of thing and dig Hardcastle's chilled out drizzle and you've consumed his past product here's some more of the same old same old. At this point in his career, Hardcastle can be described as one football coach described the other team: He is who we thought he was. Only in the most liberal sense of the word can the sound recordings of Hardcastle be even remotely considered to be any sort of "jazz."

It is false advertising to proclaim there are any masters of jazz on The Jazzmasters. Hardcastle certainly isn't interested in lively rhythms and melodies that are often made up by musicians as they play. This is background music. It's too mechanical, too bloodless and to dull be be anything else.