By FLORENCE WETZEL
November 23, 2013
Sign in to view read count 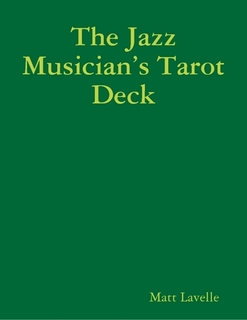 Multi-instrumentalist Matt Lavelle is an artist who loves a challenge. Not content to play one instrument, he plays several: trumpet, cornet, flugelhorn, and alto clarinet. Looking to expand his creativity, he started blogging a few years ago, which led to publishing the memoir and how-to guide New York City Subway Drama, and Beyond. Seeking to go beyond straight autobiography, Lavelle's latest offering is The Jazz Musician's Tarot Deck, an original and highly entertaining short story that's a jazz science-fiction fantasy.

Perhaps the closest literary antecedent to Tarot Deck is Nathaniel Mackey's From a Broken Bottle Traces of Perfume Still Emanate, which also combines the world of jazz with magical realism. Tarot Deck starts with Lavelle encountering a sad woman on a bench in New York City. But this is no ordinary woman; she is Alto Clarinet, a beautiful instrument who has been woefully neglected. Lavelle volunteers to help Alto, which leads to a phantasmagoric journey to the Tone World, the place where sound is born. Their vision quest also includes visits to Trumpet Mountain, Tenor Town, Clarinet City, Sun Ra's Saturn, finally ending up in Ornette Coleman's New York City loft.

Along the way, Lavelle and Alto encounter the great pantheon of jazz musicians who have passed out of the earth plane, but who fortunately still exist in other realms. Each musician presents Alto with a tarot card, explaining the card's meaning and the advice it contains for musical blossoming. Lavelle crafts insightful, often amusing, sketches of these luminaries, and the cards they provide are aptly chosen: Miles Davis offers the Devil card; Billie Holiday and Lester Young give the Moon card; Charlie Parker presents the Hanged Man card; and Thelonious Monk's card, naturally, is the Hermit. Lavelle even captures the musician's speech, such as this line from John Coltrane, which could have come straight from one of the great man's interviews: "I'm not so much into sainthood but if people are trying to become a better person with music than that's OK."

The book also mentions plenty of the living jazz musicians, including bassist William Parker, guitarist Bern Nix, trumpeter Roy Campbell, trombonist Art Baron, and above all, Ornette Coleman. Lavelle has known Coleman for many years, and one of the most enjoyable aspects of the book is getting a glimpse into their special relationship. This includes insights such as "[Coleman] had in fact erased me so that I could rewrite my own musical self by finding, learning, and then mastering my own language," but also includes Lavelle's revelation that he once "channeled John Coltrane from the Tone World so [Coleman and Coltrane] could speak for about an hour about why Ornette was still needed on Earth and what Trane was dealing with now musically and beyond."

Woven throughout the story are nuggets of information about music and musicians, such as the fact that Miles Davis told arranger Gil Evans that he wanted to include the alto clarinet in his music, or that trumpeter Clark Terry worked with clarinet books to develop his sound, or that Louis Armstrong often spent more time writing his books than playing music. There's also nice bits of evocative writing—"It was as if giant cellos made of light were being played"—as well as some down-home advice: "Nobody likes an angry Clarinet you dig."

Above all, Tarot Deck is a love story—not between a man and a woman, but between a man and a musical instrument. Obviously musicians are intimate with the instruments they play, but Lavelle is brave enough to affirm this love, including declarations such as "I gently led my fingertip up the side of Alto's forearm like a painter applying a gentle brushstroke of paint." There's even some funny scenes where Lavelle gets jealous of Alto's relationships with other musicians, particularly Miles Davis and his notorious powers of seduction.

Overall The Jazz Musician's Tarot Deck is something fresh in the realm of jazz fiction. The story is a lot of fun, but it's also an extended meditation on music: the history, the players, and the never-ending journey of finding and celebrating one's individual sound. It's a bold, thoughtful, mischievous work that's well worth checking out.