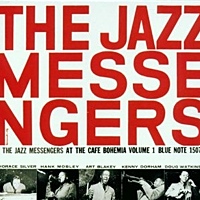 Is it possible for a band to be both legendary and underrated? The Jazz Messengers at the Café Bohemia makes that case.

Jazz fans know The Jazz Messengers is the definitive, go-to band for straight-ahead hard bop. Art Blakey was both master drummer and master talent scout—the man who co-founded and sustained the celebrated group. For all his talents as a trailblazing harp bop drummer, Blakey's probably better known for discovering and nurturing several generations of jazz in the Messengers. It's a long, impressive list.

Fans may debate which incarnation of the Jazz Messengers was the best, but this 1955 ensemble is arguably both the best and the most underrated.

If you made a list of the most famous jazz trumpeters of all time—Louis Armstrong, Dizzy Gillespie, Miles Davis, Wynton Marsalis, etc.—you'd have to go pretty far down to find Kenny Dorham. Ditto tenor saxophonist Hank Mobley. And yet both are among the best hard boppers ever, and they anchor this 1955 version of the Messengers.

Dorham is a fast, smooth trumpeter with a sound and style a lot like Gillespie's and Clifford Brown's. Mobley could easily be the Charlie Parker of the tenor. This live session is hard proof.

Volume 1 features three originals by Dorham. "The Theme" is a ridiculous fast, triple-time bopper the features Blakey riding the rim and trying every other manner of clever time-keeping to push the tempo ever faster. Dorham, Mobley and pianist Horace Silver solo marvelously. Dorham's second number, "Minor's Holiday," is another blisteringly paced bop piece. The CD's liner notes call this "one of Dorham's greatest performances," and that's not an exaggeration. It sings. Silver, on a slightly out-of-tune piano, is the essence of breathless speed and fluidity.

Volume 2 features three Mobley originals. The opener, "Sportin' Crowd," is another great toe-tapping bop vehicle with an inspiring Silver solo and great work from the horns. Mobley's "Avila & Tequila" is perhaps the most original piece from the live set, Afro-Cuban tinged drums and 12 minutes of serious cooking on horns. Mobley solos soulfully on the Gillespie standard "I Waited For You."

At the start of Volume 1, Blakey announces to the crowd that this will be "a little cooking session for Blue Note," featuring the "new star" Mobley and arranger Dorham. This is certainly their star turn and one of the best examples of hard bop ever recorded live. It belongs in every jazz collection.

About The Jazz Messengers