By HRAYR ATTARIAN
October 10, 2015
Sign in to view read count 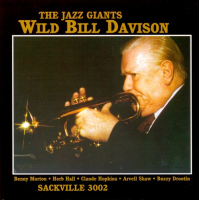 Cornetist Wild Bill Davison had a fiery, extroverted approach to playing that originated in the 1920s Chicago and mirrored his hard living. By 1968, when he recorded The Jazz Giants for the Canadian label Sackville, he had mellowed and his tone had become more melodic. A democratic leader, Davison allows the five, underrated practitioners of "prebop jazz," who join him on the date, plenty of room in the spotlight. The result is a collaborative effort that comprises delightful interpretation of nine, early standards.

Clarinetist Herb Hall highlights the emotive nature of such tunes as the languid "Dardanella" with his smooth, breezy and tad acerbic sound. Hall whose career was eclipsed by his brother Edmond Hall's fame, has only rarely been recorded. Hearing him trade evocative wails with Davison on "Black and Blue" or solo passionately on "I Surrender Dear" makes it apparent that his obscurity is truly undeserved. Davison embellishes the melody of the latter track with elegance and sophisticated flair with hints of his past fury.

Davison demonstrates superb eloquence on "(I Would Do) Anything For You" with his muted horn. The up-tempo song also features trombonist Benny Morton whose buttery thick, growling lines add a lyrical dimension to the music. Morton's work is also poorly documented, as is that of drummer Buzzy Drootin. Drootin, a long time Davison collaborator, concludes the tune with rapid-fire beats and reverberating rhythmic flourishes.

The uniqueness of this session, now reissued by Delmark records with an alternate take of "Black and Blue" is to hear these long under-documented jazzmen. It is also a rare glimpse of Wild Bill Davison's more mature and sedate mode of expression that nevertheless remains quite captivating.

Struttin' With Some Barbecue; Dardanella; Black and Blue; I Would Do Anything for You; I Found a New Baby; Blue Again; I Surrender Dear; Yesterdays; Them There Eyes; Three Little Words; Black and Bliue [alternate take].