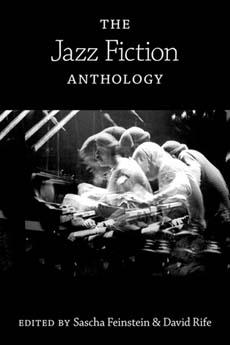 This fine anthology of jazz fiction is a treasure trove of stories and characters that illuminate the multicolored world of jazz. The editors—Sascha Feinstein and David Rife—are to be commended for their impeccable judgment in selecting the short stories and two novellas that comprise the collection. In the introduction, the editors state their ambitious aim: "to present the most definitive selection [of jazz fiction] ever published." And they succeed beautifully: the book is a generous five hundred pages that includes an impressive range of authors and stories, including writers famous and not so famous, writers black, white, male, female, dead, alive, French, Argentinean, Czech, Kiwi, a range as diverse as jazz itself. And like jazz, the stories range from early twenties to right now, giving a comprehensive view of the history of this music.

One of the choices that editors of a jazz fiction anthology have to make is whether to include, as the editors say, "fiction about jazz versus jazz-like prose." The editors wisely include both, stating, "We don't believe one point of view should negate the other." And anyway, the two often overlap: writing about jazz, particularly when describing the music, is more often than not jazz-like. The famous quote, of course, is that writing about music is like dancing about architecture (a quote attributed to many people, including Gertrude Stein and Elvis Costello). That may be so, yet it's exciting to delve into the writers' descriptions of jazz, to see what adjectives they pull out and what rhythms they create. The anthology is bursting with dynamic, often stunning prose, sometimes when describing music, but not always. Here are a few examples:

"The notes of the horns bursting like bright metallic bubbles against the sky" (Ralph Ellison, "A Coupla Scalped Indians").

"I played a four-bar intro, notes slipping effortlessly off my fingers (long-stemmed flowers trailing from a crystal vase)" (Don Asher, "The Barrier").

"The sun comin' pale and weak down the airshaft and crawlin' into his funky room on its weak knees" (Sam Greenlee, "Blues for Little Prez").

And of course the great master James Baldwin, in perhaps the most famous jazz story ever written, "Sonny's Blues": "For, while the tale of how we suffer, and how we are delighted, and how we may triumph is never new, it always must be heard. There isn't any other tale to tell, it's the only light we've got in all this darkness."

The heart of the anthology is, naturally, jazz musicians. It's a fact that jazz musicians are often unusual, colorful people—think of Monk, Bill Evans, Wayne Shorter, just to throw out a few names. To get close to them is a matter of wonder, dissipation, and sometimes vigilance. The stories are full of insights that the reader will recognize and resonate with, such as Wanda Coleman's story "Jazz at Twelve," where she drolly comments, "Early is a word foreign to Frank's vocabulary." The stories are also full of the many people whose lives intersect with jazz musicians, including wives, friends, girlfriends, band mates, children, biographers, fans, the enormous range of people who play and listen and live by this music. The anthology manages to capture many facets of this kaleidoscope, whether it's the inner world of the musician on stage, the guy standing next to you at the bar, or the child or wife waiting at home. The reader will surely find themselves somewhere in this book, sometimes with amusement, sometimes with discomfort.

Another interesting aspect of the stories is that they explore the full range of musicians' success: coming up, on top, going down, coming back, barely hanging on, and completely defeated. Characters include a clarinetist who has a family and teaches in public schools; a tenor man plucked from obscurity by academics; a pianist on the edge of success who resorts to demeaning schmoozing; Baldwin's Sonny, who stopped playing due to personal excess; and an alto player at the top (based on Charlie Parker) who is unraveling his success as fast as it comes. One of the most touching stories is "The End of Bull Mácha" by Nobel-Prize nominated Josef Škvorecký, set in Prague in the early 1950s when playing certain kinds of jazz was tantamount to challenging the Communist government, which created great danger for musicians who refused to conform. And there's also John McCluskey, Jr.'s wonderful story "Lush Life," which revolves around two musicians composing a song as they drive from Dayton to Cleveland, showing how the old traveling bands could be both fun and functional.

Another joy of the anthology is how it brings to life the long-lost worlds of old jazz clubs. Many of these writers saw musicians and scenes that the reader never will, but through these stories these worlds comes to life once more. It's a great treat to read Amiri Baraka's short story "Norman's Date," which takes place in the legendary hotspots the Five Spot and the Cedar Bar; Eudora Welty's "Powerhouse," based on her experience seeing Fats Waller; Julio Cortazar's "The Pursuer," set in the jazz world of Paris in the 1950s; or Don Asher's "The Barrier," where the reader has a front-row seat at a cutting session in a 1940s Harlem club. The magic of prose is the way it fills in historical detail and breathes life into places and names, and even goes so far as to envision and flesh out the inner world of great musicians, such as Monk in John Edgar Wideman's "The Silence of Thelonious Monk," and Buddy Bolden in Yusef Komunyakaa's "Buddy's Monologue."

Another theme that is thoroughly explored in several stories is the relationship between black musicians and their white fans. There's Terry Southern's deeply disquieting, "You're Too Hip, Baby," where a black jazz musician and his girlfriend eventually see through a sycophantic white fan. Equally disturbing is "A Really Good Jazz Piano" by Richard Yates (best-known these days as the author of Revolutionary Road), where a white fan is so entranced by his idea of who a black musician should be that he is unable to see the musician as a human being. And Langston Hughes' "The Blues I'm Playing" concerns a white patroness trying to mold her black protégé, who manages to carefully slip away from her grasp. Certainly the most full-bodied treatment of this theme is found in the anthology's excellent novellas. David Huddle's "Tenor man" shows how people can avoid their own issues by living vicariously through artists, and he also explores the comic futility of academics trying to get inside an artist's head and define the indefinable. Julio Cortazar's brilliant novella "The Pursuer" describes a biographer's complicated relationship with his subject, a self-imploding genius based on Charlie Parker. The story is a deep exploration of the attraction geniuses hold for the rest of us, full of piercing insights such as, "The hard thing is to circle around him without losing your distance, like a good satellite, like a good critic."

The editors have arranged the stories alphabetically by author, but of course one of the joys of an anthology is that the reader can jump around as they wish. No matter how you read the stories in this excellent collection, they work together beautifully, the themes bouncing off each other and echoing throughout. The stories are rounded out by a first-rate introduction and comprehensive author biographies, which give the reader a place to start if they want to delve further into any of these writers' works.

The Jazz Fiction Anthology is sure to stand for years to come as a definitive work, a place for readers to enter and enjoy, as well as a place where those wishing to write about jazz can learn the history and subtlety of the craft. One of the wonderful things about art is how it breeds more art: this anthology shows how music can inspire writing, and the collection itself is bound to give birth to even more art in the future.