By C. MICHAEL BAILEY
September 23, 2013
Sign in to view read count
Twenty-first century jazz has a greater breadth and depth than any time previously. Granularity in jazz genre has become so reduced that genre designations are almost meaningless. In jazz, we are approaching a time when jazz will no longer be "jazz" but music in the most liberal sense of the word. But, until that time, we will have contrasts like those heard from tenor saxophonist Scott Hamilton and pianist John Escreet. 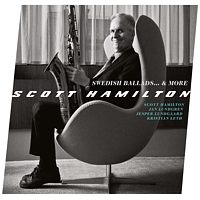 Backed by a crack Scandinavian rhythm section, tenor saxophonist Scott Hamilton delivers seven schnapps-smooth Swedish ballads and mid-tempo tunes that include the standard "Dear Old Stockholm" and Quincy Jones' "Stockholm Sweetnin.'" Pianist Jan Lundgren, bassist Jesper Lundgaard and drummer Christian Leth provide Hamilton a cool and seamless continuum for the saxophonist to play with and over. All are provided solo space, Lundgaard taking advantage of his on "Dear Old Stockholm," turning in an angular yet melodic spot without losing any swing.

Pianist Lundgren is perfectly composed within the confines of Lundgaard's Swiss timekeeping. His solos, such as "Swing in F," are informed and carefully conceived, filled with drama and relaxed suspense. This band shares a great empathy with Hamilton, who responds, in kind, with some of his warmest tenor playing. "You Can't Be In Love With A Dream" is downright creamy and rich, Hamilton playing with a breathy expectation. An audio dictionary would play this recording as an example of jazz; it is the very best of traditional mainstream. 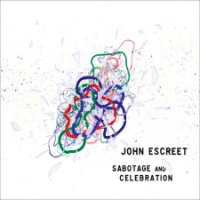 Pianist John Escreet is one of a group of progressive jazz artists redefining jazz performance. This group includes alto saxophonist David Binney, pianist Taylor Eigsti, and vocalists Gretchen Parlato, Becca Stevens, and Rebecca Martin, among many others. These musicians are intent on leaving a very definite mark on jazz as it enters its second one-hundred years. Escreet's music has been the subject of many reviews at All About Jazz including his most recent releases, Don't Fight The Inevitable (Mythology Records, 2010), The Age We Live In (Mythology Records, 2011), and Exception To The Rule (Criss Cross, 2011). He is a restless sort of musician, trying many things at once before choosing a direction for a project.

On Sabotage and Celebration, another recording of seven selections, Escreet travels from the abstract classical on "Axis of Hope" through the breezy and balladic "He Who Dares" with its craggy head and solid rhythm to the pure chaos of the middle section of the lengthy title composition, tenor saxophonist Chris Potter playing his best John Coltrane on ecstasy while Escreet weaves in and out of Don Pullen by way of Cecil Taylor. Iconoclastic drummer Jim Black plays, well, iconoclastically. "Beyond Your Wildest Dreams" features the ubiquitous David Binney on alto and soprano saxophones as well as the same string section opening the recording. It is a cogent and edgy platform for Binney to wail. Escreet's innate restlessness will insure more compelling music like this.

Tracks: Dear Old Stockholm; Swing in F; You Can't Be In Love With A Dream; Trubbel; Stockholm Sweetnin'; Min Soldat (My Soldier); Bluesioktaver.

Tracks: Axis of Hope; He Who Dares; Sabotage and Celebration; The Decapitator; Laura Angela; Animal Style; Beyond Your Wildest Dreams.