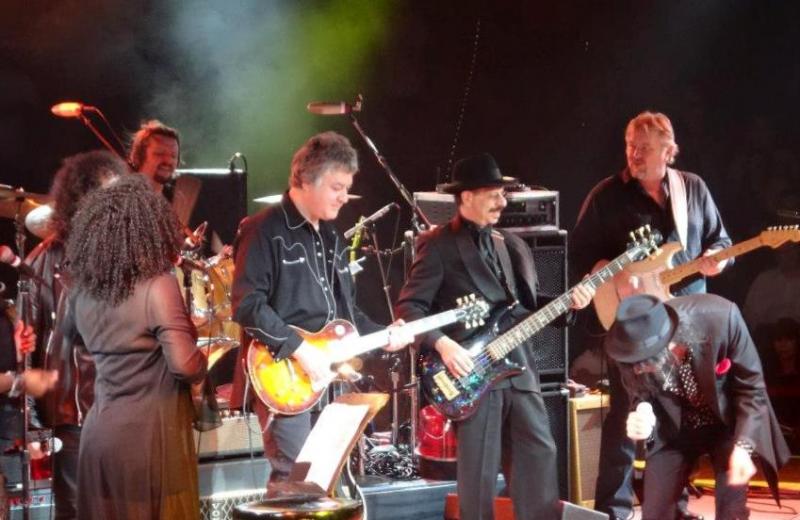 By MIKE PERCIACCANTE
October 6, 2012
Sign in to view read count
The J. Geils Band
North Fork Theatre at Westbury
Westbury, New York
September 12, 2012
To quote a phrase made famous by Peter Wolf and the members of the J. Geils Band, it was "nothing but a house party." The latest incarnation of the J. Geils Band rolled (literally—the band played in the round, meaning the stage spun, albeit slowly) into Westbury, Long Island and played an amazing set of blues-drenched rock 'n' roll that had the fans at the mid-sized arena dancing in the aisles.
The band, featuring original members Wolf (lead vocals), Seth Justman (keyboards), Danny Klein (who later in the show would be introduced by Wolf as "our one and only ambassador of funk...DK on bass") and Magic Dick (harmonica), were joined by guitarists Duke Levine and Kevin Barrie, drummer Tom Arey and the Uptown Horns. Sadly, guitarist John Geils, the band's namesake, did not join the tour due to a legal dispute between the band and Geils' solo record label, Francesca Records.
The evening started with the Joe Bayer Band serving up some good-time, countrified, bring-a-smile-to-your-face, southern-fried rock. Bayer on guitar and lead vocals, Steve DeMieri on keyboards, Phil Roth on bass, drummer Bill Burns and Joe Picciano on guitar played a great thirty minute set featuring a mixture of originals and select covers. The band's old fashioned honky-tonk 'n' roll set included "Hello Sunshine, Goodbye Rain," from its Locked, Rocked And Loaded (N.W.M.G./C.S.E., 2010) and a cover of Stevie Ray Vaughan's "House Is Rockin.'" Other highlights were "Tap That," which Bayer explained was "written by a good buddy of ours from Nashville, Tennessee," Lynyrd Skynyrd's "I Know A Little;" the tongue-in-cheek "Everything's Better With A Drink In My Hand," a more country-infused version of John Mellencamp's "Pink Houses," and what Bayer termed as "a new one called 'She's With The Band,' off our upcoming release." Though it took the audience a few minutes to warm up to Bayer and his band, by the end of the set the crowd was won over and heartily cheered the band.

After a short intermission, the J. Geils Band bounded onto the stage. With a fog machine billowing throughout the show, the venue the almost had the look of an old fashioned blues club—it was truly a modern-day juke joint. After an opening instrumental reminiscent of the opening to all "real" blues shows, Wolf appeared. Resplendent in a charcoal suit with a long jacket and an open collar dress shirt, he strode confidently onto the stage arm-in-arm with his back-up singers, the Geilettes, and the show was off and running. The beginning of the show included high-energy performances of "Wait" and "Hard Drivin' Man." And, then it was time to address the crowd.

As great a singer as Wolf is, he is also a great MC (having spent time as a disc jockey at Boston's WBCN, where he called himself "the Wolfa Goofa"). He reminded the crowd in his special brand of early-FM DJ fast-talk about the roots of rock music, specifically name-checking Muddy Waters, John Lee Hooker, Buddy Guy, James Cotton, James Brown and others. Wolf then explained that the next song the band would be performing "is called 'My Baby's Always Telling Me My Money Just Ain't Long Enough' or 'I Can't Do My Homework Any More'—the song has two titles!" The performance of the Otis Rush-penned blues classic and its lyric were awe-inspiring:

I'm walkin' round in circles in love with you

The way you got me holdin' your door

Now baby your as sweet as you can be

Everything you do keep on sending me

Everything you do is really grand

Oh baby, oh, now what can I do

I'm walkin' round in circles in love with you

The way you got me holdin' your door

I can't do my homework anymore"

Next up was "Night Time," the great rave-up from 1980's Love Stinks (EMI). Almost immediately following, Wolf took to his soapbox to announce that "being that we're in the round here, we get so many requests for this that I'd like to do it." He then began to sing an a capella version of "Feelings" which the band soon drowned out with the opening notes to "South Side Shuffle."

Stellar performances of "Cry One More Time" and "Sanctuary" followed. "Pack Fair And Square," which featured the Uptown Horns, was introduced as "a little boogie-woogie we'd like to do for Jerry Wexler and Ahmet..." Wolf's vocals and dancing with the Geilettes made this version of the song unforgettable.

The concert was as much performance as it was a chance for Wolf to play musicologist and talk about his Bronx roots. He punctuated his between-song banter with nuggets that included, "I was born in the Bronx, where we had a thing called doo-wop. My sister, who is here, took me to my first show. We all congregated at Slim's Records in the Times Square subway station to buy our doo-wop records. This is going out to Dion, who came from the neighborhood. This one is called "I Do." The cover of The Marvelows only U.S. hit (which originally appeared on the band's live 1982 EMI album, Showtime) was nothing less than inspired.

The show continued with "Just Can't Wait," which Wolf stated was from "I can't remember which album." The musical tour of the J. Geils canon continued with "One Last Kiss" and another of Wolf's patented scats, which ended with the phrase, "we are all living on borrowed time." Of course, the next song was the ballad "On Borrowed Time." He and the band then bounded into "Surrender" from Monkey Island (Atlantic, 1977) with its lyric:

Give up your heart

As the show reached the home stretch, Wolf and company broke out the most radio-friendly of its songs. "Freeze-Frame," from the 1981 EMI album of the same name, was introduced with the stinging epitaph, "Everybody remembers MTV—it was a blessing and a curse." The song itself, which Wolf has arguably felt was more of a curse, had them dancing in the aisles. They stayed right where they were, singing and dancing along to "Detroit Breakdown," with its Motor City-shakedown rhyming scheme. The massive hit "Centerfold," followed, although sadly, the sound system got a little wonky during the intro. However, the song, which spent six weeks at the top of the charts, still managed to whip the audience into a near-frenzy. Next up was "Love Stinks" the Top-40 Billboard hit and rant about unrequited love.

Appropriately, the next song was "Looking For a Love," originally recorded by the Valentinos (featuring Bobby Womack) as a much more laid-back soul offering. The J. Geils Band version that appeared on The Morning After (Atlantic, 1971) was reworked into a much faster rave-up. The live version at Westbury had even more energy, so much so that the mid-sized arena literally shook and rocked to the music.

The band then made certain to pay attention to its roots with the Juke Joint Jimmy composition, "Whammer Jammer," (another from its second album The Morning After) on which Magic Dick blows an amazing harp (which Wolf later called "the Mississippi saxophone").

The band left the stage and soon returned for the encores. Wolf began by stating, "Thank you so much! We'd like to play all might, but we've got to try to fit a few more in before curfew." He then introduced the next song with an extended scat that ended with "I musta, I said I musta, I musta got lost." The high energy version of "Must Of Got Lost" from Nightmares...and Other Tales from the Vinyl Jungle (Atlantic, 1974) kept the crowd on its feet, as did the stomping blues/soul cover of The Tremeloes' "(Ain't Nothin' But A) House Party" from Bloodshot (Atlantic, 1973).

The finale was a cover of "Land of 1,000 Dances," which some members of the audience incorrectly identified as a Larry Williams song with a similar backbeat. At the end of the show the entire band, including the Uptown Horns and Geilettes, came out onstage, joined hands, bowed, and soaked in the adulation from the adoring crowd. When the lights finally came up, exhausted audience members made their way to the merchandise stand to gobble up the band's tour t-shirts and out into the warm night.

Though eligible by virtue of the fact that its first recording was released over twenty-five years ago (the J. Geils Band's eponymously titled Atlantic Records debut was released in 1970), it is a wonder that a group that plays with such abandon and precision has not yet been inducted into The Rock 'n' Roll Hall of Fame. Hopefully, that slight will soon be rectified.