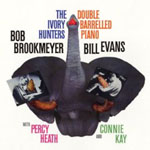 Yes, that's Bob Brookmeyer the valve trombonist, and it's Bill Evans the pianist who, during the same year as this recording, would appear with Miles Davis on the fabled Kind of Blue session (Columbia, 1959). Some listeners will no doubt be familiar with the session, originally issued by United Artists under Brookmeyer's name and with the descriptive sub-title "Double-Barrelled Piano." But if you're hearing about this curious match-up for the first time, and close to the beginning of April at that, be assured that neither Brookmeyer's listing as a "pianist" nor his playing of the instrument is a joke.

The story is that after Evans agreed to the unusual pairing, Brookmeyer was "tricked" by a clever record producer into making this session. Showing up at the studio and seeing Percy Heath and Connie Kay— one-half of the Modern Jazz Quartet—Brookmeyer was ready to take out his trombone until the presence of two tuned grand pianos made it clear that the studio had other things in mind.

Brookmeyer is good enough as a pianist to make the comparison with Evans rewarding and instructive. They take turns playing melodies and bridges, then trade whole choruses as well as phrases. In each case, Evans admittedly plays with greater precision, more focused tone, and hipper left-hand voicings, but Brookmeyer holds up his end thanks to his harmonic savvy and finger technique (often arrangers who play piano show their limitations when it comes to digital dexterity). The two pianists complement each other quite well, sounding relaxed in the hands of a bassist and drummer who by this time were playing less as two musicians than a single organism.

"The Way You Look Tonight" is one of two highlights on the date, Evans taking a round-toned, nicely shaped solo in the middle register, alternating single-noted with block-chorded melodies while Brookmeyer finds pedal tones and obligato octave phrases that risk little in the way of harmonic discord. By now the attentive listener should have no trouble distinguishing the two players, as Evans' mid-register solo on "It Could Happen to You" impresses with intricate melodic invention and cleanly voiced harmonies while Brookmeyer begins to sound somewhat erratic with a mix of widely spaced, random-sounding voicings and occasionally rhythmically stiff phrasings.

It's tempting to suggest that virtually anyone who can peck out a melody on the piano would come off sounding at worst "respectable" with support such as that provided by this trio. To Brookmeyer's credit, he neither panics nor plays it overly safe. "The Man I Love," the other stand-out on the date, begins as a ballad before yielding to a potentially unnerving up-tempo groove. The soloists briefly play melodic tag games, though on this tune as well as the concluding "I Got Rhythm," Brookmeyer begins to sound increasingly Monkish, even down to greater reliance on the sustain pedal. And when the more heralded pianist demonstrates his inimitable touch with some flawlessly executed, double-timed whirlwind note-streaming, each note distinct from the other yet receiving equal pressure, you know the game is up.

In sum, enjoyable, tasteful music-making but hardly an essential recording unless you're a Bill Evans completist—or Bob Brookmeyer.

Visit Bill Evans and Bob Brookmeyer on the web.

Honeysuckle Rose; As Time Goes By; Way You Look Tonight; It Could Happen to You; The Man I Love; I Got Rhythm.