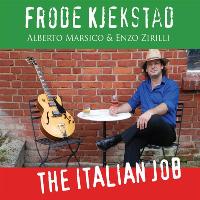 The sound of a Hammond organ has the knack of automatically resetting your watch to 1960-something, just as wah-wah guitar unfailingly conjures the 1970s and the dreaded synthesizer, the 1980s. And whilst Norwegian guitarist Frode Kjekstad's organ trio unequivocally revives the spirit of organists Jack McDuff and Jimmy Smith on The Italian Job, his trio—with organist Marisco Alberto and drummer Enzi Zirilli—swings with a bluesy delight that's hard to resist. Kjekstad previously recorded with organist Dr. Lonnie Smith and drummer Byron Landham on New York Time (Curling Legs, 2005) and he seems to excel in this intimate, grooving setting.

With the relative sonic limitations inherent in this set-up, the challenge is to avoid repetition and in this regard Kjekstad succeeds admirably. Having composed and arranged for the Sandvika Storband—one of Norway's oldest big bands—the guitarist is adept at blending voices, creating balance and juxtaposition, accentuating the dynamics and varying the moods. There's a healthy dose of '60s groove throughout, in McDuff's "Jack-pot " and even on the originals like Kjekstad's "Split Second" and Marisco's "Majority" and "Blues for Alice in Wonderland" the melodies sound very much rooted in that classic Blue Note era.

Some of the most arresting playing comes on the slower numbers. "Giu La Testa," composer Ennio Morricone's striking theme from the 1971 film "A Fistful of Dynamite," shows the trio at its most intimate. Zirilli's brushes provide the backdrop for beautifully spare, nuanced playing from both Frode and Marisco, who in turn caress and tease the melody. Kjekstad's "Waltz for EP"—dedicated to pianist Enrico Pieranunzi— delicately treads similar terrain, while the slow paced, yet deceptively powerful "Pino" exudes warmth. On these soulful numbers the subtle accompaniment is notable and the emotional weight in the collective playing trumps virtuosity.

There is, however, plenty of uninhibited soloing and exciting stuff it is too. All three musicians play with real swagger on "String bearer" and "Liersagen"; the latter in particular is a heady fest of swirling, tumbling blues lines, though with the momentum building towards a volcanic climax the number rather disappointingly fades out. The trio fire does, however, hint at its power in a live setting. The closer, Zirilli's "Teeth for Tooth" is a bouncing blues inspired by "Tea for Two." Marisco stays in the upper registers of his KeyB, exhibiting touch of great touch.

The standout track, stylistically speaking, is "Freedom Theme," whose funky head dissolves into the realms of abstract sci-fi. A curiously metronomic drumbeat comes and goes as organ shimmers in psychedelic waves. It could be the soundtrack for a cult—1960s certainly—space adventure. On The Italian Job strong musicianship is highlighted by the strength of the compositions. Kjekstad doesn't set out to reinvent the wheel but there's much to admire in these passionate performances and fans of the great McDuff/guitarist Kenny Burrell recordings will find plenty of reason to cheer.