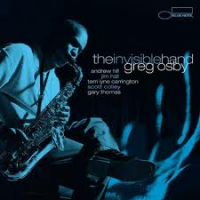 Greg Osby has come a long way from his beginnings in St. Louis playing funk and R&B. His sound crossed our radar screens after moving to Brooklyn and joining forces with Steve Coleman in the mid-‘80s to form M-BASE, an urban-beat driven jazz. Osby had a very calculated, sometimes emotionless sound. It was if he was working equations in his head as he played. Where his older recordings suffered from a staid studio approach, his recent effort, Banned In New York, a live “bootleg” recording, displays Osby as an emotional quick-witted band leader. His last disc, Friendly Fire, a co-led affair with Joe Lovano proved Osby deserves to be considered as one of the top musicians working today.

The Invisible Hand is further proof that Osby treads comfortably between the past and, importantly, the future of jazz. Joining him are Gary Thomas and Teri Lynn Carrington from his early Brooklyn days and two of the professor emeriti of jazz, Jim Hall and Andrew Hill. Hall is a guitarist that favors a subtle touch; a peculiar feature for someone so associated with cutting edge jazz. He has recorded classic albums with Sonny Rollins, Lee Konitz, and Paul Desmond. Lately, his Telarc dates have featured his third stream thinking. Andrew Hill’s Blue Note dates of the sixties were cerebral efforts, not quite post-bop and not really free jazz affairs. Early in Osby’s career he was a sideman for the late-‘80s Blue Note comeback of Hill. Likewise, he has recorded on two recent Hall dates. The Invisible Hand trades mathematics for emotion. The slow to mid-tempos presented are fertile grounds for group interplay and interpretation. For instance, they take on Fats Waller’s “Jitterbug Waltz,” a tune forever associated with Eric Dolphy. Rather than compete with our collective memories, Osby deconstructs the composition choosing bug parts over the whole, reworking it as an intellectual exercise. Osby’s deference to his esteemed colleagues shows. A stately and exquisite affair.